CNN reported today that one FBI official is under criminal investigation for altering surveillance documents on Carter Page. This likely includes the FISA Court documents that allowed the Obama-Comey deep state to spy on candidate Trump and his family and campaign.

According to CNN one FBI official has already admitted to making the changes to the documentation.

An FBI official is under criminal investigation after allegedly altering a document related to 2016 surveillance of a Trump campaign adviser, several people briefed on the matter told CNN.

The possibility of a substantive change to an investigative document is likely to fuel accusations from President Donald Trump and his allies that the FBI committed wrongdoing in its investigation of connections between Russian election meddling and the Trump campaign.

The finding is expected to be part of Justice Department Inspector General Michael Horowitz’s review of the FBI’s effort to obtain warrants under the Foreign Intelligence Surveillance Act on Carter Page, a former Trump campaign aide. Horowitz will release the report next month.

Horowitz turned over evidence on the allegedly altered document to John Durham, the federal prosecutor appointed early this year by Attorney General William Barr to conduct a broad investigation of intelligence gathered for the Russia probe by the CIA and other agencies, including the FBI. The altered document is also at least one focus of Durham’s criminal probe.

It’s unknown how significant a role the altered document played in the FBI’s investigation of Page and whether the FISA warrant would have been approved without the document. The alterations were significant enough to have shifted the document’s meaning and came up during a part of Horowitz’s FISA review where details were classified, according to the sources.

New updated reports on this FBI official reveal it is a ‘low-level FBI lawyer’ and WaPo stealth-deleted the portion of its report claiming the individual worked underneath former counterintelligence chief Peter Strzok.

Justice Department Inspector General Michael Horowitz has found evidence that an FBI lawyer manipulated a key investigative document related to the FBI’s secretive surveillance of a former Trump campaign adviser — enough to change the substantive meaning of the document, according to multiple reports.

The new evidence concerning the altered document, which pertained to the FBI’s FISA court warrant application to surveil Page, is expected to be outlined in Horowitz’s upcoming report. CNN first reported the news, which was largely confirmed by The Washington Post.

But the Post, hours after publishing its story, conspicuously removed the portion of its reporting that the FBI employee involved worked “beneath” Peter Strzok, the FBI’s since-fired head of counterintelligence. The Post did not offer an explanation for the change, which occurred shortly after midnight. Earlier this week, the DOJ highlighted a slew of anti-Trump text messages sent by Strzok when he was leading the Hillary Clinton email investigation and the probe into the Trump campaign.

“The person under scrutiny has not been identified but is not a high-ranking official — they worked beneath former deputy assistant director Peter Strzok, according to people familiar with the investigation who spoke on the condition of anonymity to discuss material that has not yet been made public,” The Post wrote in its now-deleted paragraph.

In February of 2018, then-Chairman of the House Intel Committee Devin Nunes (R-CA) released a 2-page FISA memo revealing who signed off on the FISA application and three subsequent renewals on Trump campaign advisor Carter Page.

The FBI and DOJ obtained one FISA warrant in October of 2016 and three subsequent renewals on Carter Page, and the fourth and final FISA renewal was signed in June of 2017.

As required by law, a FISA order must be renewed by the FISC [Foreign Intelligence Surveillance Court] every 90 days and each renewal requires a separate finding of probable cause.

Despite being spied on for nearly one year, Carter Page was never charged with a crime, so what did the FBI present to the FISA judges on Carter Page that was so damning that it prompted the judges to grant a total of FOUR FISA warrants?

Read the list of FBI, DOJ officials who signed off on all four FISA applications on Carter Page here.

The New York Times revealed that the “low-level lawyer” under criminal investigation for allegedly doctoring materials used to obtain renewals of the Carter Page surveillance warrant is Kevin Clinesmith – who worked on both the Hillary Clinton email investigation and the Russia probe, was part of Special Counsel Robert Mueller’s team of anti-Trump democrats, and interviewed Trump campaign adviser George Papadopoulos.

Clinesmith, a 37-year-old graduate of Georgetown Law, “took an email from an official at another federal agency that contained several factual assertions, then added material to the bottom that looked like another assertion from the email’s author, when it was instead his own understanding,” according to the report.

Mr. Clinesmith included this altered email in a package that he compiled for another F.B.I. official to read in preparation for signing an affidavit that would be submitted to the court attesting to the facts and analysis in the wiretap application.

The details of the email are apparently classified and may not be made public even when the report is unveiled. -New York Times

In other words, we won’t get to see whatever the FBI used to trick the FISA court into granting Page’s renewals.

According to the Washington Post, however, Horowitz has concluded that the altered email “did not affect the overall validity of the surveillance application.”

Mr. Trump’s allies have complained about how the Justice Department used information from the Steele dossier in the wiretap applications. Along with evidence from other sources, the filings cited some information from Mr. Steele’s dossier about meetings that Mr. Page was rumored to have had with Kremlin representatives during a trip to Russia that year.

Still, people familiar with questions asked by Mr. Horowitz’s investigators have suggested that he is likely to conclude that the filings exaggerated Mr. Steele’s track record in terms of the amount of value that the F.B.I. derived from information he supplied in previous investigations. The court filings in the Page wiretap application said his material was “used in criminal proceedings,” but it was never part of an affidavit, search warrant or courtroom evidence. -New York Times

The Times has suggested that Horowitz will criticize FBI officials involved in the investigations but will ultimately absolve them of wrongdoing.

Clinesmith, a former attorney with the FBI’s National Security and Cyber Law Branch while working under FBI’s top lawyer, James Baker, resigned two months ago after he was interviewed by DOJ Inspector General Michael Horrowitz’s office. Horrowitz in turn sent a criminal referral to US Attorney John Durham, who was tasked with investigating the Obama DOJ’s conduct surrounding the 2016 US election.

The referral appears to at least be part of the reason that Durham’s inquiry was elevated from an administrative review to a criminal investigation, according to the report. The findings are set to be revealed on December 9, when Horowitz will release his long-awaited report, which Trump’s allies believe will reveal an effort to undermine his 2016 campaign.

In addition to Clinesmith’s fabricated FISA evidence, the FBI used an unverified dossier from former British spy Christopher Steele, paid for in part by the Clinton campaign via law firm Perkins Coie and Fusion GPS, in their pursuit of Carter Page. The agency has claimed in court filings that the Steele Dossier was not used in warrant appplications, affidavits or courtroom evidene – but was used in “criminal proceedings.”

The Conservative Treehouse notes of Clinesmith:

(2) Kevin Clinesmith remained in the FBI during the entirety of the Horowitz investigation. He was not released until the investigation was complete and the draft report was submitted. So the FBI knew they had a problem with Clinesmith back in February of 2018 and he was allowed to continue work until September of this year. It would seem obvious he was being monitored.

(3) Clinesmith’s status during the investigation aligns with another Main Justice employee also connected to the FISA process who was similarly in position throughout and also left in September 2019. That would be Tashina Guahar.

The Intelligence Community Inspector General (ICIG), Michael Atkinson, who modified the whistle-blower forms & allowed hearsay so that the CIA leaker could file a whistleblower complaint, was the chief legal counsel for DOJ-NSD over Kevin Clinesmith & his anti-Trump lover Sally Moyer. This fraud was necessary to obtain the FISA warrant to spy on then President-elect Donald Trump.

Sally Moyer crafted and defined the scope of the warrant to examine Hillary Clinton’s emails on the Abedin/Weiner laptop so narrowly as to ensure these emails would never see the light of day.

“The FBI only reviewed emails to or from Clinton during the period in which she was Secretary of State, and not emails from Abedin or other parties or emails outside that period,” Horowitz pointed out in a section of his report discussing concerns that the search warrant request was “too narrow” [source]

Also removed from the search warrant were the BlackBerry data — even though the FBI had previously described them as the “golden emails,” because they covered the dark period early in Clinton’s term [source], as well as Huma Abedin’s Yahoo emails, even though investigators had previously found classified information on her Yahoo account and would arguably have probable cause to look at those emails as well [source].

No wonder these two corrupt Deep State cover-upers were selected to partake in the first coup, the Mueller Special Counsel investigation.

Clinesmith was identified by Horowitz as one of several FBI officials who harbored animus towards President Trump, after which he was kicked off the Mueller Russia investigation in February 2018. Two other FBI officials removed for similar reasons were Peter Strzok and Lisa Page, both of whom also worked on the Clinton and Trump investigations, and both of whom have similarly left the bureau.

On November 9, 2016 – the day after Trump won the election, Clinesmith texted another FBI employee “My god damned name is all over the legal documents investigating his staff,” adding “So, who knows if that breaks to him what he is going to do.”

Then on November 22, 2016, he said “Hell no” when asked by another FBI attorney if he had changed his views on Trump. 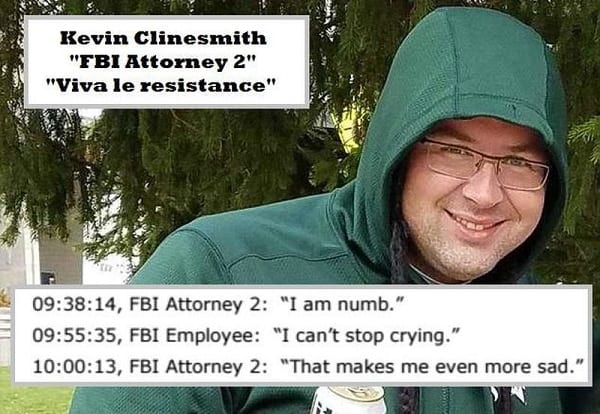 When asked to explain himself, Clinesmith told Horowitz: “It’s just the, the lines bled through here just in terms of, of my personal, political view in terms of, of what particular preference I have,” adding “But, but that doesn’t have any, any leaning on the way that I, I maintain myself as a professional in the FBI.”

A professional document fabricator. We’re sure he’ll be a GoFundMe millionaire by tomorrow.