Every three years, the Federal Reserve releases a study on consumer finances that is a stockpile of data on everything from household net worth to incomes. The 2019 Fed survey confirms statements I have made previously regarding how the Fed’s monetary interventions made the top 10% more prosperous than ever. They just left the vast majority of Americans behind.

While we will address the statistical data, there is also the anecdotal evidence that supports this thesis. Since 2008 there have been rising calls for socialistic policies such as universal basic incomes, increased social welfare, and even a two-time candidate for President who was an admitted socialist. Such things would not occur if “prosperity” was flourishing within the economy.

“The disparity between the Fed’s interventions, the stock market, and the real economy has become abundantly clear. For 90% of Americans, there has not been, nor will there be, any economic recovery.” 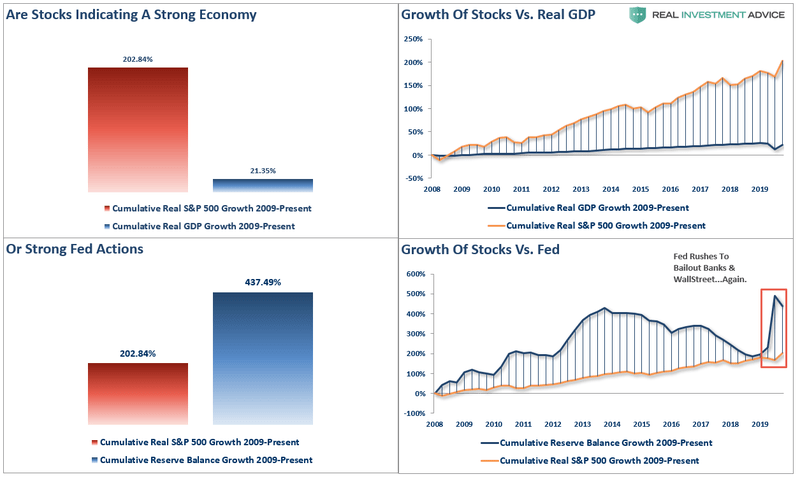 Stocks Are Not The Economy

Take a close look at the chart above.

Companies derive their revenue from the consumption of goods, products, and services they produce. It is logical that stock price appreciation, over the long-term, has roughly equated to economic growth. However, that relationship has become unhinged since the financial crisis due to the Fed’s interventions and suppressed interest rates.

From Jan 1st, 2009 through the end of July, the stock market has risen by an astounding 203% or roughly 18% annualized. With such a large gain in the financial markets, there should be a commensurate growth rate in the economy.

While monetary interventions are supposed to be supporting economic growth through increases in consumer confidence, the outcome has been quite different.

Not really. As noted by the WSJ previously:

“As of December 2019—before the shutdowns—households in the bottom 20% of incomes had seen their financial assets, such as money in the bank, stock and bond investments or retirement funds, fall by 34% since the end of the 2007-09 recession, according to Fed data adjusted for inflation. Those in the middle of the income distribution have seen just 4% growth.” – WSJ