Skip to content
Intel Community Inspector General Michael Atkinson stonewalled lawmakers during his Friday testimony to the House Intelligence Committee and refused to explain how or why the whistleblower form was changed.The ICIG secretly gutted the whistleblower complaint form in September to include second-hand knowledge and water cooler gossip to support allegations of misconduct.The ICIG then backdated the whistleblower rules and allowed the complaint form filled out by the CIA officer on August 12 to qualify under the new rules.Atkinson refused to explain why he allowed this to happen.The Federalist reported:

In tense testimony before the House Permanent Select Committee on Intelligence (HPSCI) on Friday, the inspector general for federal spy agencies refused to disclose why his office backdated secret changes to key whistleblower forms and rules in the wake of an anti-Trump whistleblower complaint filed in August, sources told The Federalist.

Michael Atkinson, the intelligence community inspector general, told HPSCI lawmakers during a committee oversight hearing on Friday that the whistleblower forms and rules changes were made in September, even though the new forms and guidance, which were not uploaded to the ICIG’s website until September 24, state that they were changed in August. Despite having a full week to come up with explanations for his office’s decisions to secretly change its forms to eliminate the requirement for first-hand evidence and to backdate those changes to August, Atkinson refused to provide any explanation to lawmakers baffled by his behavior.

In the letter Atkinson admitted the changes to the form were made at the time of the partisan CIA leaker’s complaint.

The ICIG also admitted that it changed its own whistleblower rules because of the anti-Trump complaint from the CIA spy:

In June 2019, the newly hired Director for the Center for Protected Disclosures entered on duty. Thus, the Center for Protected Disclosures has been reviewing the forms provided to whistleblowers who wish to report information with respect to an urgent concern to the congressional intelligence committees. In the process of reviewing and clarifying those forms, and in response to recent press inquiries regarding the instant whistleblower complaint, the ICIG understood that certain language in those forms and, more specifically, the informational materials accompanying the forms, could be read – incorrectly – as suggesting that whistleblowers must possess first-hand information in order to file an urgent concern complaint with the congressional intelligence committees.

As Conservative Treehouse notes the changes were made at the same time Rep. Adam Schiff was accusing President Trump, Rudy Giuliani and holding back funding pending assistance with political opponents. (This was already found to be a lie.) 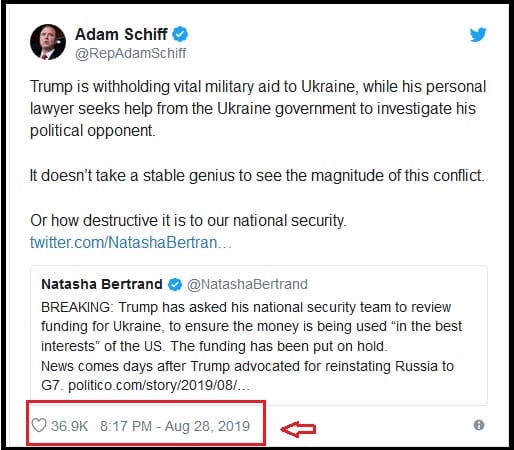 We now know that House Intel Chairman Adam Schiff was made aware of the CIA officer’s allegations against President Trump before he filed the whistleblower complaint form.

We also know that Schiff broke the House rules when he withheld classified information from the Minority members of the House Intel Panel (such as Devin Nunes).