James Madison (1751-1836) helped frame the Bill of Rights, member of the Continental Congress and rapporteur at the Constitutional Convention in 1776 and 4th President of the United States: In an address to the Virginia Convention he said:

I believe there are more instances of the abridgment of the freedom of the people by gradual and silent encroachments of those in power than by violent and sudden usurpations.” 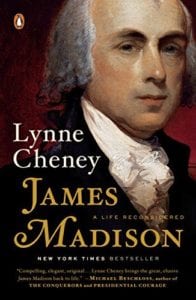 Lin-Manuel Miranda’s play “Hamilton” has reignited interest in the founding fathers; it features James Madison among its vibrant cast of characters. This majestic new biography of James Madison explores the astonishing story of a man of vaunted modesty who audaciously changed the world. Among the Founding Fathers, Madison was a true genius of the early republic.

Outwardly reserved, Madison was the intellectual driving force behind the Constitution and crucial to its ratification. His visionary political philosophy and rationale for the union of states—so eloquently presented in The Federalist papers—helped shape the country Americans live in today.

Along with Thomas Jefferson, Madison would found the first political party in the country’s history—the Democratic Republicans. As Jefferson’s secretary of state, he managed the Louisiana Purchase, doubling the size of the United States. As president, Madison led the country in its first war under the Constitution, the War of 1812. Without precedent to guide him, he would demonstrate that a republic could defend its honor and independence—and remain a republic still.