Michigan Democrat nominee for State Representative Maurice Imhoff wanted to carry out a school shooting of Northwest Middle School in Jackson, Michigan. He was arrested by the police before he could carry out the shooting and charged for “threat of terrorism.” In response to the public finding this out about his past, he admitted to making “poor decisions.”

He’s still on the ballot in Michigan. He made a fake attempt to quit campaigning after his past crimes were uncovered earlier this month. This week he announced that when he said he was dropping out it was all a lie, and he is now ‘re-entering the race’

The media covers for their fellow Democrat by saying he simply had a “troubled past.” The Detroit News said he had a “challenging upbringing.” Stories confirming that the candidate, Maurice Imhoff, was charged with making a “false report or threat of terrorism” have gone dark.

The state media’s double-standards on this story is egregious.

This all came to light not through any enterprising reporting by the corrupt Michigan press corps, but because his former girlfriend laid out the accusations in a lengthy Facebook post.

In response, candidate Imhoff blames everyone but himself. In a letter, he blamed how he was raised, his socioeconomic status, his absent father figure, unnamed life challenges, being black, failing grades, social circle, time, among other factors as to why he was not responsible for the allegations. Imhoff even declines to specify which allegations are true and which are false in his self-serving October 5, 2022 letter.

In the letter he claims to “end his campaign.” But under state law his name cannot be removed from the ballot at this late date. But just this week he announced he was just lying before, now he’s back in the race.

Locals report that he has still campaigning regardless of claiming he was dropping out, and supporters of his are still working to elect Imhoff. Imhoff would be the youngest member of the Michigan House if elected, at age 20.

At the time of the alleged threats to shoot up a middle school, Imhoff was reportedly on probation for assaulting a police officer.

No media outlet shows the picture of Imhoff with incumbent Democrat Michigan Governor Gretchen Whitmer, who had previously endorsed Imhoff. 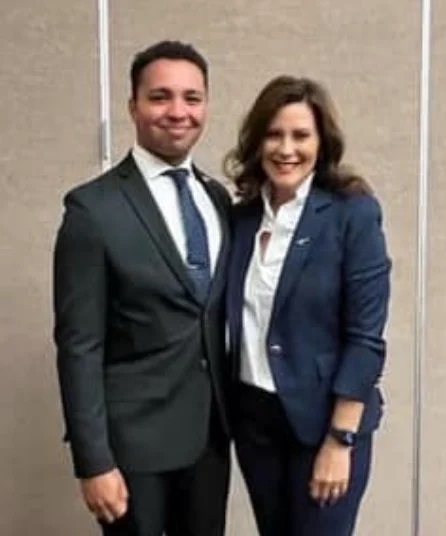 Just a month ago, Whitmer launched an operation to “crack down on gun crime.” A month later she meekly withdrew her endorsement without a word from a fellow Democrat who was a gun criminal.

Some speculate Whitmer only acted because of her lagging campaign, where Republican Tudor Dixon is closing the gap on the campaign trail for Michigan Governor. Republican candidate Tudor Dixon noted Whitmer’s hypocrisy on social media.

Locals report that establishment Democrat leaders were trying to expunge Imhoff’s record but were unable to do so before it became public.

The Daily Caller reports that he currently works for the AFL-CIO, in addition to campaigning for state representative.

Some of Imhoff’s largest campaign donors so far include an Engineer at Google, and a Director from Seinfeld.

The November general election is in less than two weeks, where Imhoff faces Republican Kathy Schmaltz.