Keith Coney, who was believed to be with Kevin Ives and Don Henry the night they were murdered, told friends and family members that law enforcement officials were responsible for the murders. Two days later, he was killed when his motor cycle crashed while he was being chased. According to some officers, his throat had previously been slashed, and he was apparently fleeing his attackers when he lost control. However, this crucial information was left out of the final report. There was no autopsy or investigation. 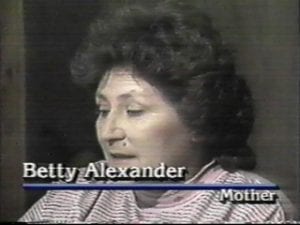 “Mrs. Alexander says her son knew the two teenagers run over by the train, and she says he indicated to her he had been there when the boys had died. . . that he spotted two attackers.”