By my count, because America no longer has an institution that looks into and investigates the accuracy of events before relaying them to the public (Yes, children, America once had this thing we called a news media), we have just experienced our fourth noose hoax in almost as many years.

There was the D.C. noose hoax — rope used to move equipment.

There was the University of Delaware noose hoax — hangers for tree lanterns.

There was the Oakland noose hoax — exercise ropes.

And now we have the NASCAR noose hoax because someone decided to freak out over a loop tied into a rope that’s used to pull down a garage door. Of course, Al “Tawana Brawley” Sharpton is pretty sure Bubba is still the victim here. 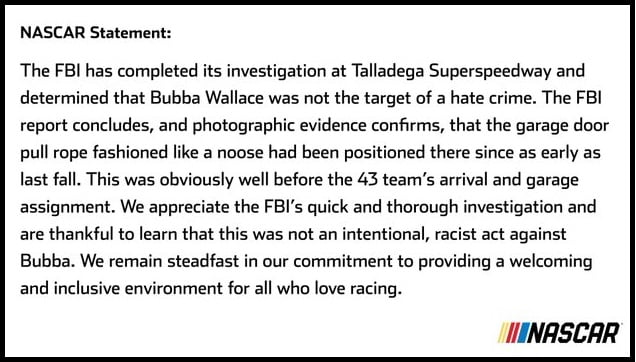 FBI STATEMENT: (Insufferably the FBI kept calling it a “noose”, although it wasn’t.) The FBI wasted “fifteen FBI special agents” on this investigation.  Good grief. 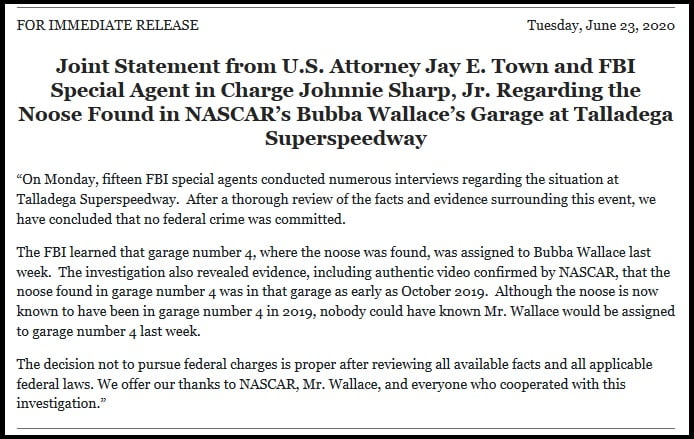 The manual garage door rope on stall #4 was tied into a hand loop by the team of  Ryan Blaney sometime after the October 2019 Talladega qualifier and before the start of the main race.  There are numerous ropes on several garage bay doors that are tied to make similar loops at the bottom.  It just makes it easier to pull the door down. 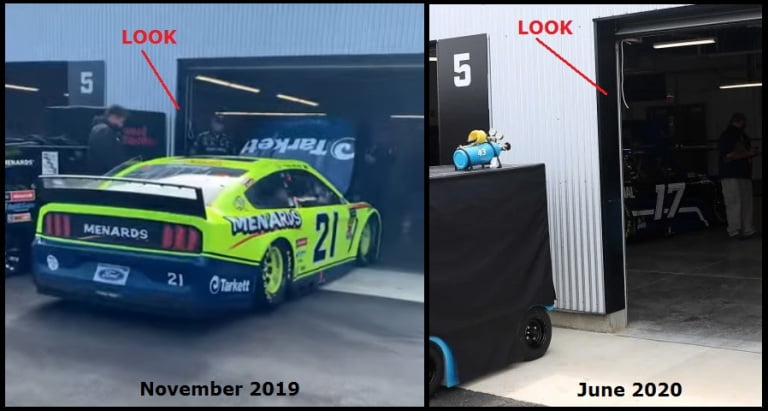 While statues are toppled and monuments are desecrated throughout the country, while predominantly black neighborhoods are razed by rioters, looters, and arsonists — 15 FBI agents still had enough time on their hands to dig into the gobsmacking mystery of the intent behind the person (or persons) who, all the way back in 2019,  tied a loop into a rope used to pull down a garage door.

There is so little racism in America, 15 FBI agents — 15! — were rushed to the scene of a loop tied into a garage pull.

But because everyone on the left is insane, deranged with hate, desperate to be a victim, desperate for the societal cache that comes with being damaged in some way, Bubba Wallace can’t and won’t let it go… He simply doesn’t have it in him to appear on CNNLOL and say, Yeah, I’m embarrassed. My team overreacted. It’s a big nothing and I want to apologize. I work with great people, I have the best fans, and I’m relieved to know that’s still true, so let’s move on; and use this as a lesson to not overreact, to give our friends and co-workers and country the benefit of the doubt.

No, he can’t be gracious or generous or decent or humble or uniting or act as a healer… BECAUSE IT’S STILL A NOOSE!

CNNLOL: Have you seen ropes like that hanging from garages. It’s that fairly typical?

BUBBA WALLACE: Don, the damage I have of what I’ve seen of what was hanging in my garage is not a garage pull. I’ve been racing all my life, we’ve raced out of hundreds of garages that have never had garage pulls like that. So people who want to call it a garage pull and put out videos and photos of knots as their evidence, go ahead. But from the evidence that we have, that I have, it’s a straight-up noose. The FBI has stated it was a noose over and over again. NASCAR leadership has stated that it was a noose. I can confirm that. I actually got evidence of what was hanging in my garage, over my car, around my pit crew guys, to confirm that it was a noose. Never seen anything like it. I talked to my crew chief about it. I said, Is this something like — I wanted to make sure we weren’t jumping the gun. And I said this isn’t a knot, this isn’t — and he’s like, Bubba; this isn’t something that can be done within a second of just tying a knot and being on the way. This is something that took time.

BUBBA WALLACE: That’s what I am saying. It was — it is a noose.

When this story first broke, we all knew it was a hoax because almost every hate crime is revealed as a hoax…

And a hundred or so more.

Simply put, the demand for racism in America far exceeds the supply…

The hoax was a failure in one way, but a success in another way for the globalist: Following the hoax, NASCAR banned all displays of the Confederate flag at its events and properties, following Wallace’s call for just such a measure.