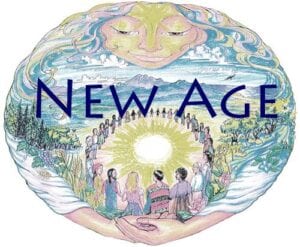 The “New Age” (or Self-Help) Movement, is a broad-based amalgam of spiritual, social, and political elements with the common aim of transforming individuals and society through a diverse and non-biblical spiritual awareness. The New Age is a utopian vision, an era of harmony and progress with mother earth and nature. Comprising individuals, activist groups, businesses, professional groups, and spiritual leaders and followers, the movement brought feminist, ecological, spiritual, and human-potential concerns into the mainstream in the 1980s, creating a large market in the United States and other countries for books, magazines, audio and videotapes, workshops, retreats, and expositions on the subject, as well as for natural foods, crystals, and meditation and healing aids.

Often seen as resurgent paganism or Gnosticism, the modern movement has more recent roots in 19th-century spiritualism and in the 1960s counter culture, which rejected materialism in favor of Eastern mysticism and preferred direct spiritual experience to organized religion. Techniques for self-improvement and the idea that the individual is responsible for and capable of everything from self-healing to creating the world, have found applications in health care and counseling as well as in sports, the armed forces, and corporations and have provoked debate in religious and other circles.