The New York Times has been forced to (quietly – on Christmas Eve) admit to its readers that the CIA must approve every article they write before being published.

When the NYT got criticised for redacting a recent op-ed about 9/11, they published an explanation to their readers in which they unintentionally confess that the White House and intelligence services control everything they print.

Endofinnocence.com reports: As you can probably guess, their readers did not respond to their cry for help, and if their readers don’t care, why would they care? 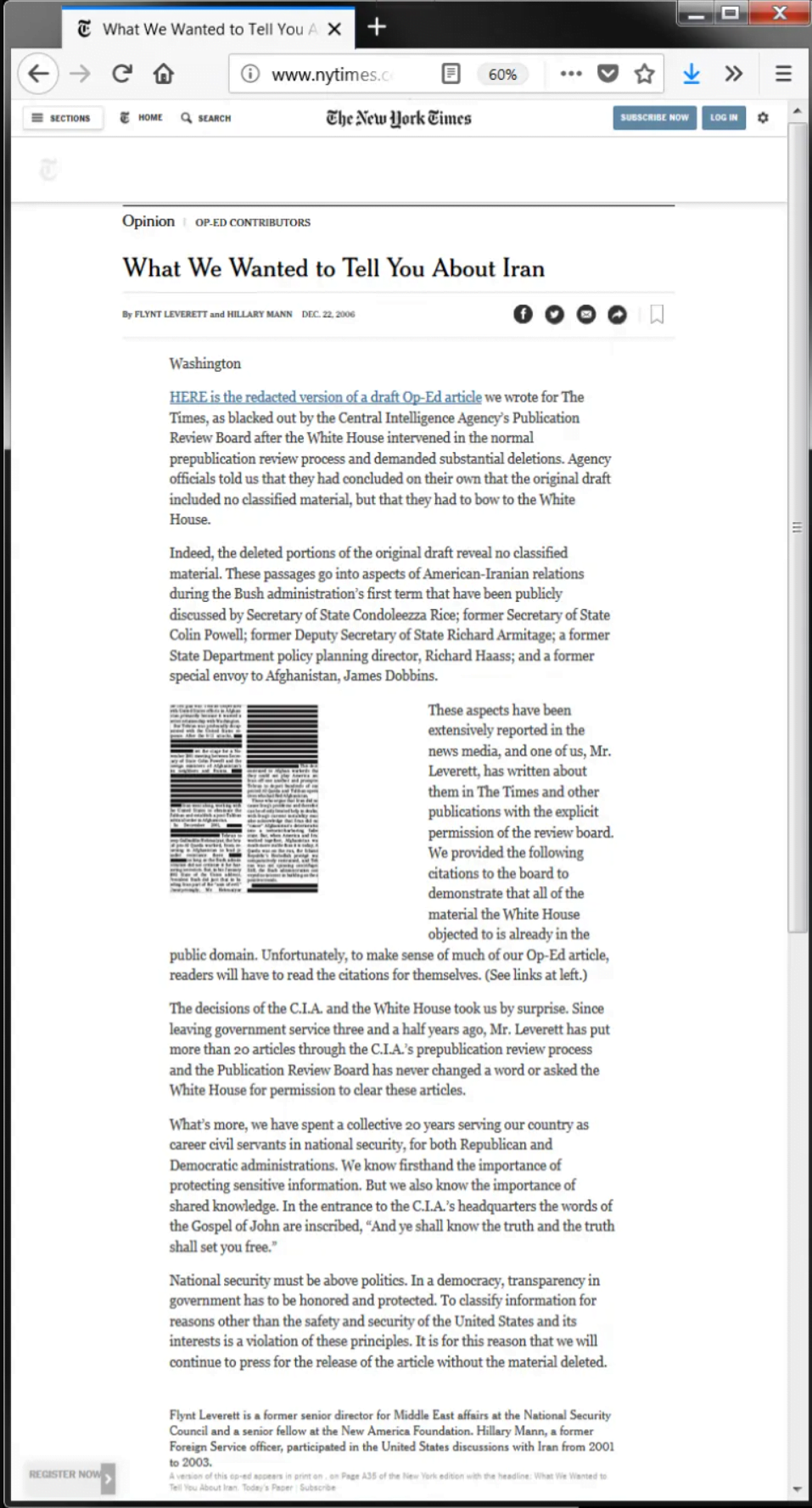 In the first sentence, the NYT explains that its redacted op-ed piece was, “blacked out by the Central Intelligence Agency’s Publication Review Board after the White House intervened in the normal prepublication review process and demanded substantial deletions.”

In other words, the NYT wants you to believe that it is normal for the CIA and the White House to approve everything the NYT publishes.

One might think that controlling the NYT would be sufficient given how it has traditionally set the news agenda for the entire country, but there are several reasons why we can be certain the US government also controls what every news outlet publishes.

First, it is inconceivable that the kind of people who would insist on controlling the NYT would be satisfied controlling only the NYT.

That’s just basic human nature. Also, the NYT supposedly has the most power and the most integrity of any news outlet in the US, so if the NYT could not resist being controlled by government, then no other news outlet could resist either.

Perhaps most compelling of all is that the NYT could not compete if it were the only outlet being controlled, and thus the fact that it still exists means that all of its competitors are being controlled as well.

Another candidate for the title of “most compelling evidence” is the cover up of the ubiquitous self-evident earth-shattering story of WTC 7. Of course, the 100% news cover up of WTC 7 is not just in the US … it is global, so someone even more powerful than the US government would have to be orchestrating that … but let’s not get sidetracked.

What the NYT is doing (without realizing it) is asking its readers, “Are you going to let them get away with this?” and its readers said, “Yes.”

The NYT readers are conformist like that because the NYT has been such a politically correct and biased government lapdog for decades, but it was a liberal lapdog, and thus its readers and staff were mostly the kind of people who imagined themselves to be anti-war and skeptical of the military and the CIA.

Therefore, their readers are the kind of people who were offended by seeing redacted lines, which was a really in-your-face kind of move. Nevertheless they accepted the somewhat less in-your-face claim that it is normal for the CIA to approve everything the NYT publishes.

In the second sentence, the NYT admits, “Agency officials told us that they had concluded on their own that the original draft included no classified material”. In other words, the redacted material was not classified, but the government, in a who’s-your-daddy kind of move, decided to censor it anyway—as part of the normal review process of everything the NYT publishes.

Although the NYT did not qualify the limits of the approval process, thus implying it includes everything, is it correct to assume that it covers everything? The redacted material was all unclassified and publicly available, so that was not a limiting factor, which means the approval process must cover everything the “White House” and the “CIA” thinks is important.

That would include any material that mentions anything about politics, elections, government, court cases, laws, economics, race, guns, drugs, foreign countries, etc.

Even a sports column or an entertainment column might mention something important to the White House or the CIA. In other words, it may not cover everything, just everything that mentions anything important. In the context of censorship, that’s everything, because unimportant speech doesn’t need protection.

Nowhere in the article does the NYT question the right of the government to approve everything they publish. They only explain at the end of the article that they should have been allowed to include the redacted material because it was not classified and because they have always been very obedient in the past.

This is also why attacks against Bill Clinton, Obama, and Trump have been so weak. Neither party will ever expose the most serious misdeeds of their opponents because that would reveal to the people how their government does not work like they think it does—that their government is not legitimate.