A survey of the percentages of search traffic received by 36 U.S. news sites, including many of the biggest, provides stark evidence that Google, representing nearly 90 percent of the market share of U.S. searches, is playing ideological favorites with those leaning left and most antagonistic to President Trump and the Republican Party near the last stretch of the 2018 mid-term elections that could change the balance of power in Congress.

The survey conducted by WND Sept. 22, 2018, using data from Alexa.com, shows no alternative, independent or “right-of-center” press making the top 15 preferred by Google’s algorithms. The data collected on each include two percentages – the first, the total percentage of the site’s overall traffic coming from search engines and the second, the percentage of traffic each site gets directly from Google as an immediate, direct upstream referral.

The survey includes nearly all the top news sites and most of the larger alternative, independent and right-of-center press. None of the latter made the top 15 new sites preferred by Google, a virtual monopoly, along with Bing, Yahoo, DuckDuckGo, MSN and all others accounting for less than 16 percent combined.

No. 16 on the list is the NewYorkPost.com, owned by Rupert Murdoch’s News Corp. and shows less antagonism toward President Trump and the Republican Party than its competitors.

The biggest surprise for many might be the top position of the Houston Chronicle, which may not come to mind for most Americans as a left-of-center news organization. However, it is rated as such by MediaBiasFactCheck.com. In addition, the largest paper in Texas is supporting Democrat Beto O’Rourke’s challenge of Republican Sen. Ted Cruz in his upcoming re-election race. 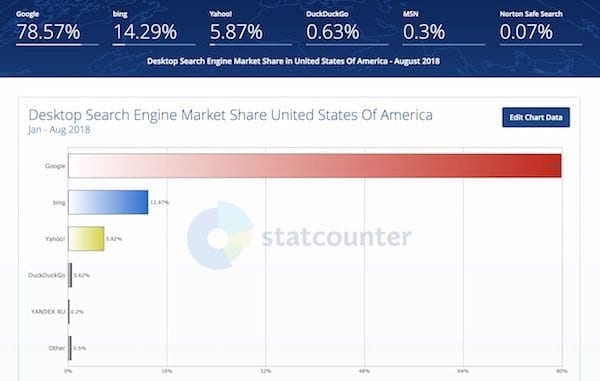 Then there’s Bloomberg, owned by former New York Mayor Michael Bloomberg, a billionaire and one of the most liberal mayors in the history of the city, his news agency also reflects a strong lean to the portside.

But one of the most interesting stories is HuffingtonPost.com.

“It should not rightly be considered news at all,” says Joseph Farah, founder of WND.com, the first alternative, independent online news site’s started 21 years ago. Farah also served as editor-in-chief of major market metro dailies in California before launching WND.com. “The Huffington Post is really a far leftist blog site with no rules except smearing everything to the right of, well, the Huffington Post, which is pretty much everything. Notice how much respect it gets from Google.”

TheAtlantic.com comes up No. 12 on the list reflecting its predictably liberal Boston milieu, followed by ABCNews.go.com with very healthy search rankings. Anyone who checks out Google News on a regular basis will not be surprised to see the NewYorkTimes.com ranking well – quite possibly the most liberal major newspaper in America. Reuters is fashionably reflective of the political climate in the European Union establishment.

That’s the top 15. The comes NYPost.com – an anomaly. It’s not predictably right-wing. It’s more of a fun paper that takes shots at all sides. But it is owned by News Corp’s Fox News – and outranks it considerably in favorability from Google. That it gets a higher percentage of search traffic than the next three is somewhat surprising – NBCNews.com, MSNBC.com and the WashingtonPost.com. But they are all doing quite well – way above average.

The 20th spot belongs to a right-of-center newspaper – WashingtonTimes.com. That’s arguably two out of 20. Then there’s the Wall Street Journal or WSJ.com, which is also owned by Murdoch’s News Corp., but does not really reflect a conservative or libertarian viewpoint outside of its editorial page and commentary.

What took so long to get to President Trump’s favorite “fake news” purveyor – CNN.com? It’s right in the middle of the pack – still with very health search action. Next there’s another right-leaning newspaper, the Washington Examiner, followed by MotherJones – the far left magazine that is apparently a favorite with Google’s algorithms too. TheDailyBeast.com is pretty hardcore left, but apparently not as much in favor Google. Still it beats the No. 1 cable news network’s online outlet by nearly 2 percent.

Next comes WND.com, followed by Freebeacon.com. Now we’re definitely getting down into algorithm bias time. It’s a surprise to find TheHill.com in this neighborhood. Then comes DailyCaller.com with only 8.9 percent of its traffic coming from search. Compare that with the sites above getting more than five times as much. The rest of the pack includes IJR.com, with just 8 percent, Breitbart.com with just 7.2 percent, PJMedia with a scant 4.7 percent, the WesternJournal.com with only 4.6 and then there was Drudge – who apparently doesn’t need any search engine referrals to get his billions of visitors.

“I believe this survey represents a very objective look at how Google treats news sites with different viewpoints about as radically different as one could imagine,” says Farah. “Remember, Google is supposed to be a neutral player under law. In its ‘carrier’ status under the Communications Decency Act of 1996, it is likened to a utility – like an old telephone company – that cannot discriminate based on politics and ideological considerations. Do you think its meeting the test?”

There were a couple of other anomalies the study revealed with some foreign news sites.