Actor James Woods reportedly received a Twitter suspension after sharing a satirical meme about voting in the upcoming midterms in November.

According to screenshots, Twitter directed Woods to delete a July 20 post claiming his tweet contained “text and imagery that has the potential to be misleading in a way that could impact an election.”

His statement: “You are a coward, @jack. There is no free speech for Conservatives on @Twitter.”#JamesWoods pic.twitter.com/zGVOnxP0D6

Go to Term Page
" >Soy face” smiles accompanied with text telling Democrat men to stay home in November in order to empower women to decide the outcome of the midterms.

“We’re making a Woman’s Vote Worth more by staying home,” text on the meme said, including the hashtags #LetWomenDecide and #NoMenMidterms.

In his tweet, Woods indicated he believed the image was fake, but he entertained the possibility it could be real.

Wouldn’t it be ironic if the “Streisand Effect” kicked in and it was retweeted 10,000 times?

“Pretty scary that there is a distinct possibility this could be real. Not likely, but in this day and age of absolute liberal insanity, it is at least possible,” Woods wrote.

The website Twitchy theorizes Woods may have been targeted for harassing liberals.

It “Would appear said tweet is from way back in July which means if he was indeed reported he was targeted; we’re also going to guess they ‘got’ him for saying liberal insanity, claiming it was targeting a group,” Twitchy wrote.

Woods is a prolific pro-Trump Twitter user who’s extremely popular on the platform. He’s followed by 1.72 million users with many of his tweets criticizing the liberal establishment.

After learning of the suspension, Woods released a statement on Twitter through journalist Sara Miller:

“You are a coward, @jack [Dorsey]. There is no free speech for Conservatives on @Twitter.”

According to Miller, the tweet is no longer visible on Woods’ timeline, and he’s unable to tweet.

Jimmy’s timeline is still visible to everyone.

The tweet they want him to delete is not visible.

Earlier this month, Woods commented on Alex Jones’ widespread social media ban, saying that while he didn’t listen to Jones, he believed banning him was a “slippery slope.”

I’ve never read Alex Jones nor watched any of his video presence on the internet. A friend told me he was an extremist. Believe me that I know nothing about him. That said, I think banning him from the internet is a slippery slope. This is the beginning of real fascism. Trust me.

“I’ve never read Alex Jones nor watched any of his video presence on the internet. A friend told me he was an extremist. Believe me that I know nothing about him. That said, I think banning him from the internet is a slippery slope. This is the beginning of real fascism. Trust me.”

In the meantime, Twitter refused to suspend an account that openly engaged in doxxing, threats and targeted harassment.

The ‘Smash Racism DC’ group, which was founded by an Antifa-supporting professor who has encouraged his Twitter followers to “assassinate Mike Pence” as well as to kill cops and local politicians, was responsible for the harassment of Senator Ted Cruz and his wife in a DC restaurant on Monday night the same week.

Following the confrontation, which was at least equal in its malice to Alex Jones’ confrontation of The Cable News Network (aka: the Communist News Network, CIA News Network, Clinton News Network, Concocted News Network, etc.) is simply fake news. According to CNN’s own three-time Emmy award winning journalist, Amber Lyon, CNN is routinely paid by the US government to make up fake news and also to selectively report on certain events in ways that fit their narrative. Plus, the Obama administration even paid CNN for editorial control over their content, badly distorting the news in their(...) 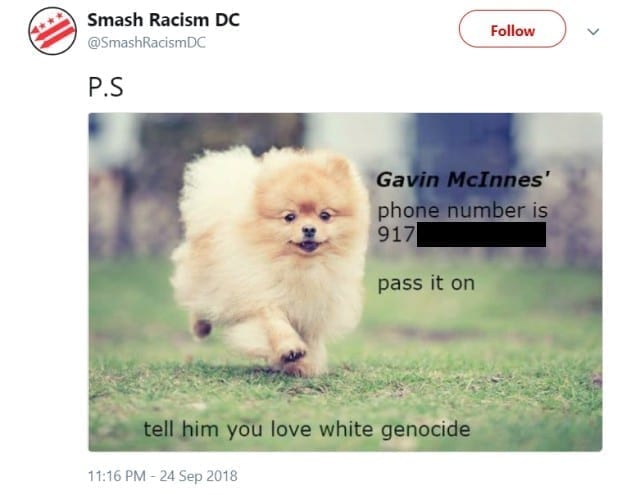 In a separate tweet, the group declared, “You are not safe. We will find you. We will expose you. We will take from you the peace you have taken from so many others,” which is clearly a violation of Twitter’s rules on targeted harassment, which state, “You may not engage in the targeted harassment of someone, or incite other people to do so.” 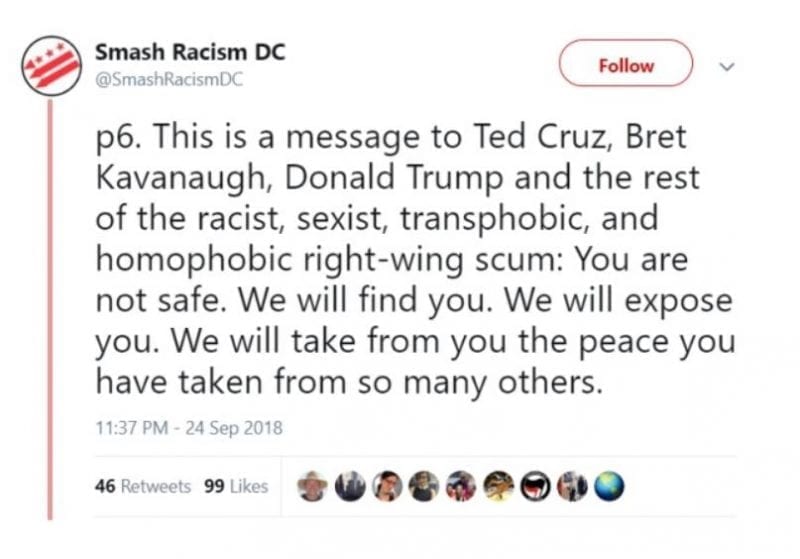 The Smash Racism DC’s banner image features an Antifa flag, a group that has been designateda domestic terror organization by the DHS and the FBI. 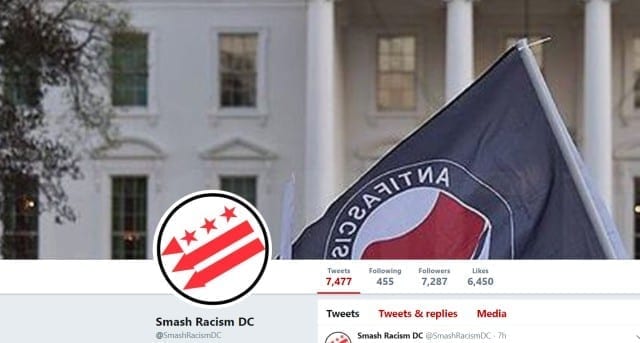 Despite multiple clear violations of Twitter’s rules, the Smash Racism DC account is still online, as is the account of the group’s founder, Mike Isaacson, despite Isaacson tweeting multiple violent threats against politicians and police officers.

The tweets above were deleted, but the account itself remains active.

Compare this to Alex Jones, who was permanently banned by Twitter for being rude to a CNN reporter during an exchange outside a Congressional hearing in DC.

Compare Twitter’s response to that metered out to actor James Woods, who remains locked out of his account because he posted a satirical meme.

Apparently, satirical memes and coarse language are bannable offenses, but open threats of violence, targeted harassment and doxxing won’t get you suspended or banned by Twitter (so long as you have the right politics).

This once again completely debunks the notion, trotted out yet again by the mainstream media after Trump’s recent executive order targeting Big Tech was announced, that there is no social media bias against conservatives.

Yes, there clearly is. It happens on a daily basis and this is yet another example.