Print shows a newspaper owner, possibly meant to be Joseph Pulitzer, sitting in a chair in his office next to an open safe where “Profits” are spilling out onto the floor; outside this scene are many newspaper reporters for the “Daily Splurge” rushing to the office to toss their stories onto the printing press, such stories as “A Week as a Tramp!! Wild and Exciting Experiences of a Daily Splurge Reporter”, “A Reporter of the Daily Splurge Spends a Thrilling Week in an Asylum!”, “An Organ Grinder’s Life”, “Life in Sing Sing – a Splurge Reporter in Disguise”, “Divorce Court Details”, “Private Scandal”, “a Night Around Town” by a woman reporter “in Men’s Attire”, life on the streets “As a Flower Girl”, “Thrilling Exposé”, “How beggars are treated on 5th Ave. by Fanny Fake”, and “High Spiced Sensation”. A notice hanging on the wall of the office states “The Motto of the Daily Splurge – Morality and a High Sense of Duty”. 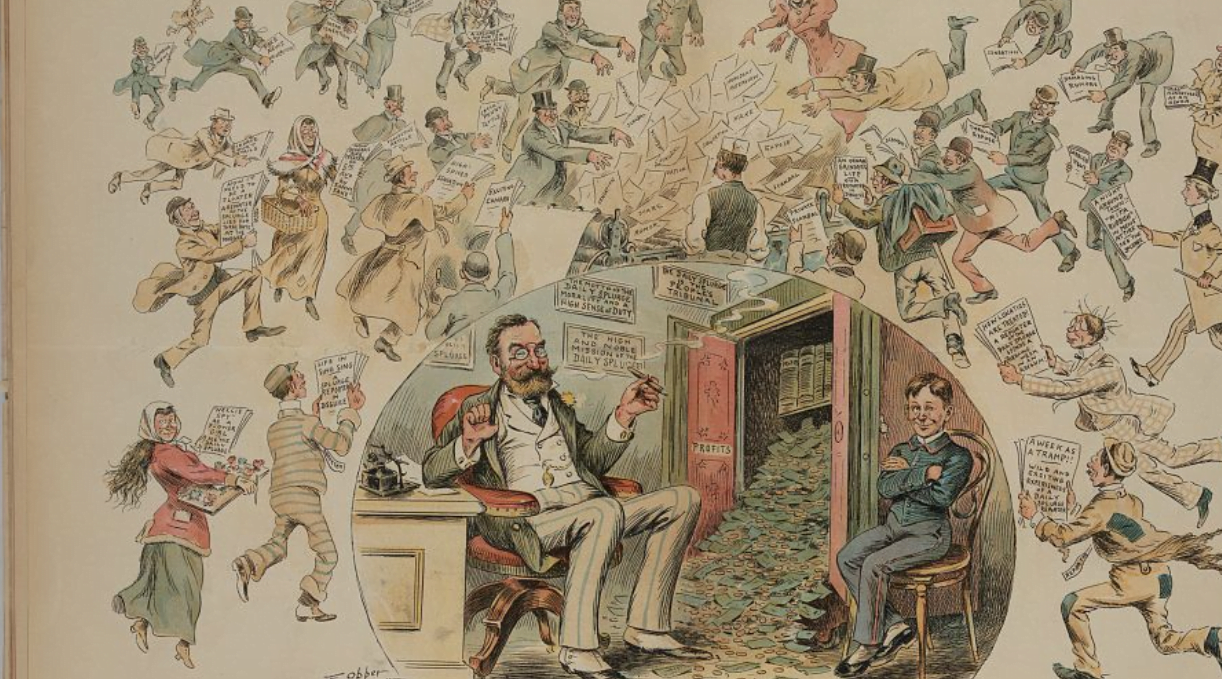 BELOW: Detail from The Fin de Siècle Newspaper Proprietor, an illustration featured in an 1894 issue of Puck magazine. Amid the flurry of eager paper-clutching public, one holds a publication brandished with the words “Fake News”.

The peddling of public lies for political gain (or simply financial profit) can be found in most periods of history dating back to antiquity, it is in the late 19th-century phenomenon of “Yellow Journalism” that it first seems to reach the widespread outcry and fever pitch of scandal familiar today. Why yellow? The reasons are not totally clear. Some sources point to the yellow ink the publications would sometimes use, though it more likely stems from the popular Yellow Kid cartoon that first ran in Joseph Pulitzer’s New York World, and later William Randolph Hearst’s New York Journal, the two newspapers engaged in the circulation war at the heart of the furore.

Although these days his name is somewhat synonymous with journalism of the highest standards, through association with the Pulitzer Prize established by provisions in his will, Joseph Pulitzer had a very different reputation while alive. After purchasing The New York World in 1884 and rapidly increasing circulation through the publication of sensationalist stories he earned the dubious honour of being the pioneer of tabloid journalism. He soon had a competitor in the field when his rival William Randolph Hearst acquired the The New York Journal in 1885 (originally begun by Joseph’s brother Albert). The rivalry was fierce, each trying to out do each other with ever more sensational and salacious stories. At a meeting of prominent journalists in 1889 Florida Daily Citizen editor Lorettus Metcalf claimed that due to their competition “the evil grew until publishers all over the country began to think that perhaps at heart the public might really prefer vulgarity”.

The phenomenon can be seen to reach its most rampant heights, and most exemplary period, in the lead up to the Spanish-American War — a conflict that some dubbed “The Journal‘s War” due to Hearst’s immense influence in stoking the fires of anti-Spanish sentiment in the U.S. Much of the coverage by both The New York World and The New York Journal was tainted by unsubstantiated claims, sensationalist propaganda, and outright factual errors. When the USS Maine exploded and sank in Havana Harbor on the evening of 15 February 1898, huge headlines in the Journal blamed Spain with no evidence at all. The phrase, “remember the Maine, to Hell with Spain”, became a populist rousing call to action. The Spanish–American War began later that year.