Is it possible that mainstream medicine got cholesterol all wrong? That not only does cholesterol have no connection to heart disease, but that high cholesterol is actually a good thing? Yes, it’s more than possible — here I’ll show some evidence that higher cholesterol is associated with longer life.

Should we be concerned about what cause we die from?

Yes, and no. On the one hand, if you’re dead, you’re dead, no matter from what. On the other, dying in your sleep in old age may be preferable to a long, lingering illness.

Nevertheless, from a public health standpoint, it seems a mistake to focus on changing something that lowers the risk of death from one cause only to raise that risk from another.

While total cholesterol is a poor if not utterly worthless risk marker for heart disease, doctors have focused on it to the exclusion of how it might affect other causes of death. It does you little good to save yourself from heart disease if it means that you increase your risk of death from cancer.

All-cause mortality — death from anything — is the most appropriate measure to use when looking at risk factors.

Population studies in Japan show that people of all ages with higher cholesterol live longer.1 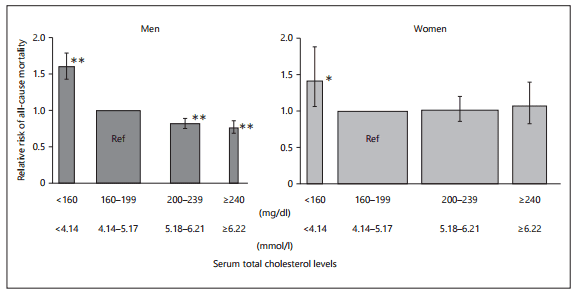 Consider the chart above, taken from the paper. It shows all-cause mortality by cholesterol levels, men on the left, women on the right.

What about outside Japan? The following chart shows cumulative all-cause mortality of people older than 85 in Leiden, The Netherlands, by cholesterol level. 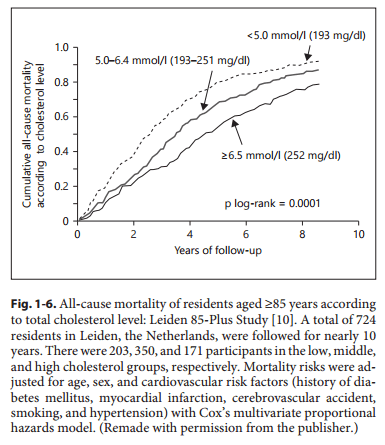 The cohort with an average cholesterol of 252 mg/dl, the highest, had the lowest death rates.

The following shows data from elderly people in Finland. Those with cholesterol greater than 232 mg/dl had the lowest death rates. 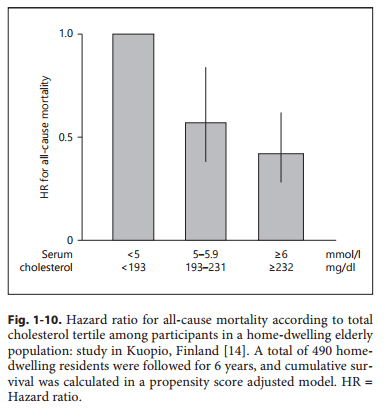 The data from Japan is for all ages; the data from outside Japan is for the elderly. What about the data for all ages, outside of Japan? The authors believe that the presence of people with familial hypercholesterolemia, which causes a very high cholesterol level and which raises the risk of death, in the highest cholesterol categories, accounts for higher death rates in those categories. They also argue that cholesterol levels in that disorder are not the cause of increased death rates.

A recent review in the prominent medical journal BMJ regarding LDL cholesterol, the risk marker considered most significant, found either no association or an inverse association between LDL and death rates.2

High LDL-C is inversely associated with mortality in most people over 60 years. This finding is inconsistent with the cholesterol hypothesis (ie, that cholesterol, particularly LDL-C, is inherently atherogenic). Since elderly people with high LDL-C live as long or longer than those with low LDL-C, our analysis provides reason to question the validity of the cholesterol hypothesis. Moreover, our study provides the rationale for a re-evaluation of guidelines recommending pharmacological reduction of LDL-C in the elderly as a component of cardiovascular disease prevention strategies.

Furthermore, the Honolulu study seems to provide evidence that actually raising cholesterol is protective, since “Only the group with low cholesterol concentration at both examinations had a significant association with mortality.”

The authors of the study concluded, “We have been unable to explain our results. These data cast doubt on the scientific justification for lowering cholesterol to very low concentrations (<4.65 mmol/L) [<180 mg/dl] in elderly people.”

Why would people with low cholesterol die at higher rates than those with higher cholesterol?

Several things could be going on.

Cholesterol may protect against infections and atherosclerosis.3

Cholesterol may protect against cancer.4

A strong association was found between low cholesterol and violence. Odds ratio of violence for cholesterol of <180 mg/dl was 15.49. 5

Several studies have found an association between low cholesterol and suicide. For instance, one study found that those in the lowest quartile (fourth) of cholesterol concentration had more than 6 times the risk of suicide as those in the highest quartile.6

A number of studies have found that, at least in people older than 60, high cholesterol is associated with lower death rates.

This fact casts considerable doubt on the cholesterol hypothesis of heart disease.

Why, with so much evidence against it, does the cholesterol theory still have so much traction? To quote the authors in the first cited study, it’s all about the money:

We believe the answer is very simple: for the side defending this so-called cholesterol theory, the amount of money at stake is too much to lose the fight.

Update: I hadn’t seen this before I wrote this article, but Uffe Ravnskov, a co-author of some of the above-cited studies, has a good article with many relevant citations, The Benefits of High Cholesterol.