It’s official: This year marks the first time that Americans will spend more time staring down at their phones and tablets than they will watching television.

The average U.S. adult will spend three hours and 43 minutes on mobile devices this year, according to EMarketer Inc., which is eight minutes longer than the three hours and 35 minutes that will be spent in front of the TV. And about 70% of their time will be spent on their smartphones, alone.

That shakes out to Americans spending nine less minutes tuning into shows, sporting events and movies on the tube, and eight more minutes streaming them on Netflix NFLX, +0.16%, Hulu and Amazon AMZN, -0.96%, or catching clips on Twitter TWTR, -1.46%  and YouTube, compared to last year. 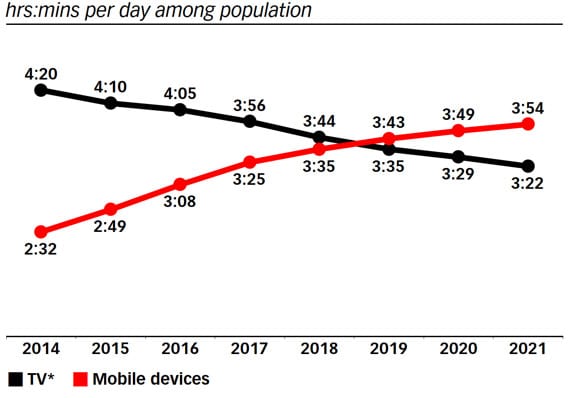 “We’ve expected that mobile would overtake TV for a while, but seeing it happen is still surprising,” said Yoram Wurmser, eMarketer principal analyst, in a statement. “As recently as 2014, the average U.S. adult watched nearly 2 hours more TV than they spent on their phones.”

Smartphone apps have been drawing the most eyeballs away from television, sucking people in for almost three hours a day (two hours and 57 minutes, to be exact). But not all online content is so engaging; users spend just 26 minutes on mobile browsers.

And within those apps, people are getting lost listening to digital audio, like music and podcasts on Spotify SPOT, +1.57% and Pandora, followed by social network activity on platforms such as Facebook FB, +0.23%, Instagram and Snapchat SNAP, +3.25%.

EMarketer predicts that smartphone use will continue to dominate media consumption, although it will plateau in 2020 as users become more concerned about their screen time. This has already led Apple AAPL, +0.07% and Google GOOGL, +0.29%   to roll out features that let users monitor and limit the time they spend on their devices.