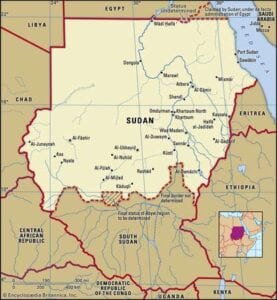 Sudan, country located in northeastern Africa. The name Sudan derives from the Arabic expression bilād al-sūdān (“land of the blacks”), by which medieval Arab geographers referred to the settled African countries that began at the southern edge of the Sahara. For more than a century, Sudan—first as a colonial holding, then as an independent country—included its neighbour South Sudan, home to many sub-Saharan African ethnic groups. Prior to the secession of the south in 2011, Sudan was the largest African country, with an area that represented more than 8 percent of the African continent and almost 2 percent of the world’s total land area.

Since ancient times the Sudan region has been an arena for interaction between the cultural traditions of Africa and those of the Mediterranean world. Islam and the Arabic language achieved ascendancy in many northern parts of the region, while older African languages and cultures predominated in the south.

The country became independent in 1956 and has had numerous changes in government since then. Successive regimes found it difficult to win general acceptance from the diverse political constituencies. An early conflict arose between those northern leaders who hoped to impose unity upon the nation through the vigorous extension of Islamic law and culture to all parts of the country and those who opposed this policy; the latter included the majority of southerners and those northerners who favoured a secular government.

From 1955 until 1972 there prevailed a costly and divisive civil war, fought largely in the south but punctuated by violent incidents in the north. The Addis Ababa Agreement of 1972 ended the conflict only temporarily, and in 1983 the civil war resumed. By this time the comparative lack of economic development in the south had become a new source of regional grievance, and northern leaders’ continuing attempts to Islamize the Sudanese legal system proved an even more potent source of discord. Attempts to end the civil war included numerous discussions, cease-fires, and agreements but yielded very little success until 2005, when the Comprehensive Peace Agreement ended the warfare. It also granted southern Sudan semiautonomous status and stipulated that a referendum on independence for the south would be held in six years. The results of the vote, held in January 2011, were overwhelmingly in favour of independence, and South Sudan was declared an independent country on July 9, 2011.

Sudan’s capital, Khartoum, is located roughly in the centre of the country, at the junction of the Blue Nile and White Nile rivers. It is part of the largest urban area in Sudan and is a centre of commerce as well as of government. 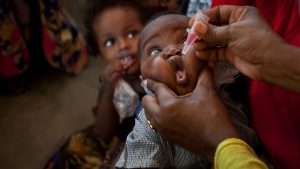 The World Health Organization says a new polio outbreak in Sudan is linked to an ongoing vaccine-sparked epidemic in Chad — a week after the U.N. health agency declared the African continent free of the wild polio virus. In a statement this week, WHO said two children in Sudan — one from South Darfur state and the other from Gedarif state, close to the border with ...
Read More
January 16, 2019

Last year, Christians were persecuted more than ever before in the modern era — and this year is expected to be worse: "4,136 Christians were killed for faith-related reasons," according to Open Doors USA in its recently published World Watch List 2019 (WWL) of the top 50 nations where Christians are persecuted. "On average, that's 11 Christians killed every day for their faith." Additionally, "2,625 Christians ...
Read More
September 21, 2001 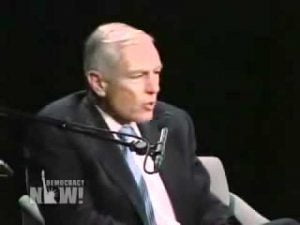 A tantalizing passage in Wesley Clark's 2007 memoir suggested that another war was part of a long-planned Department of Defense strategy that anticipated "regime change" by force in no fewer than seven Mideast states. Critics of the war often voiced suspicions of such imperial schemes, but this was the first time that a high-ranking former military officer has claimed to know that such plans existed. The ...
Read More