Crowds of lockdown-weary Brits gathered in London at a ‘Unite for Freedom’ rally to protest the Covid-19 measures, an event quickly dubbed a gathering of “conspiracy loons” for its strong message against restrictions and mandates.

People began gathering in London’s Trafalgar Square around noon and then marched to the Houses of Parliament to show opposition to the ongoing shutdowns, introduced as part of the UK’s response to the pandemic.

The rally, called under the slogans of “No More Lockdowns – No Social Distancing – No Masks,” among others, attracted more than 10,000 people aghast at the looming prospect of another lockdown being introduced, as talk of pandemic’s “second wave” dominates the media.

One woman told The Guardian’s Jason Rodrigues that the government’s reactions to the outbreak was “completely out of proportion,” lamenting how “people’s liberties have been taken away” and arguing that it’s only going to get “worse and worse” – a common sentiment at the rally.

As the crowds grew, they started chanting slogans like “freedom!” and “save our rights.”

Footage showed demonstrators, many of whom did not wear masks, holding signs saying “No ‘New Normal’” and “Covid-1984,” while others outright blasted the virus as a “hoax.” 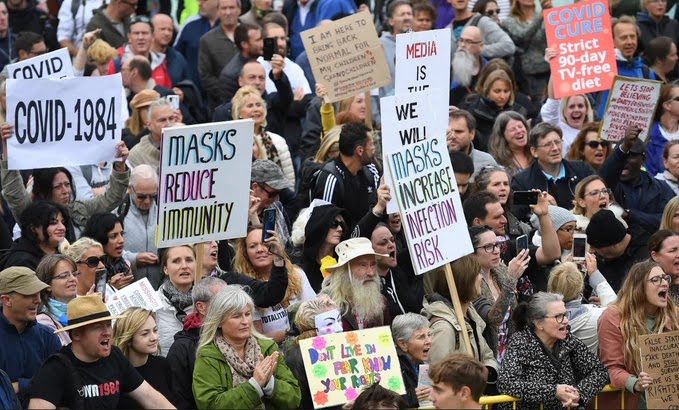 It is the latter that the media coverage focused on, with some headlines blasting the demonstration as a gathering of “anti-vaxxers” and “conspiracy theorists.”

David Icke, conspiracy theorist in chief, has warned for thirty years that our masters are building a New World Order, a claim for which he is ridiculed and censured. But millions are listening to him now. I was standing behind the stage and saw thousands of faces relinquishing their scepticism. Some of his ideas are far-fetched, but he tells inconvenient truths.

A charismatic speaker, Icke lauded the intelligence of the virus. Stay six feet away from each other – it’s got a tape measure. We can meet friends outside our social ‘bubble’ for up to 15 minutes, because it’s got a watch. It must have a calendar too, because masks were made mandatory a week after the announcement. And the virus knows which political events to attend; that is, any rally that the establishment doesn’t like, while Black Lives Matter protests are somehow immune.

“If you find yourself at a rally in Trafalgar Square arguing against the World Health Organisation … listening to and agreeing with David Icke … then you should seek professional advice,” musician John Spiers tweeted.

I see thousands of people are protesting in Trafalgar Square against the wearing of facemasks and “protesting against a second wave” as if a virus can be reasoned with. Good luck with that… pic.twitter.com/90UKwZM4Pb

If you’re wondering how stupid Britain is right now, a group of people who refuse to wear masks to prevent the spread of the coronavirus are gathering in trafalgar square to protest a second wave of coronavirus

Another speaker, Kate Shemirani, encouraged everyone in the crowd to give each other a hug and then exclaimed, “If this was a real virus, technically all of you lot should be sick.”

The gathering has received plenty of media backlash for not adhering to social distancing rules and not wearing masks – in fact, “take off the mask” became its rallying cry at one stage. Ironically, such worries have not been as widely expressed over the ongoing Black Lives Matter protests, which have also drawn massive attendance, with many ignoring Covid-19 guidances in the name of social justice.

“How many people calling today’s Trafalgar Square anti-lockdown protesters ‘covidiots’ said the same about the Black Lives Matter protests during the actual lockdown?” commenter Martin Daubney pointed out on Twitter.

London’s rally was just one in a series of recent anti-lockdown events in Europe, where increasingly many people are finding it hard to keep up with the ever-changing Covid-19 regulations and are sceptical of the difference such pandemic attributes as masks make.

Even Britain’s deputy chief medical officer said this week that evidence that masks protect from Covid-19 is “not very strong,” despite the mandates in place.

A similar protest in Berlin was disbanded by police on Saturday after they deemed demonstrators were failing to adhere to social distancing measures. Around 3,000 officers were deployed to police the crowd of 18,000.

At the end of the rally Piers Corbyn was arrested and later hit with a £10000 fine for organising an illegal event. Yet the massively-funded BLM, marching on the same weekend, went unpunished. Unlike the peaceful protest at Trafalgar Square, BLM agitators taunted police and called for violent insurrection. The hypocrisy of the authorities is mind-boggling, but not everyone sees it because the media continue to act as the propaganda arm of the state. 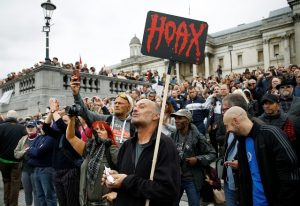 The London newspaper Evening Standard reduced the attendance to ‘hundreds’, before the predictable smears. An awful Huffington Post report rebutted the Covidiots’ delusions: they say that freedoms have been denied, but section 2 of the Equality Act still applies. That’s the ‘right to life’, so they should be happy. Actually even that most fundamental of rights has been breached by the government, denying access to healthcare and causing a rise in suicide.

Our politicians have been pathetic. It seems likely that coronavirus will be merged with seasonal flu to justify indefinite renewal of emergency laws, with no end to muzzling of the masses and an increasingly punitive regime of fines and arrests. The only way to stop this is by popular revolt, and there are promising signs.

On the same day as the London rally a vast crowd protested in Berlin, despite the government’s attempt to ban the event. A section of the crowd attempted to break into the Reichstag, quelled by a legion of police in full riot gear. According to rumours, the German army is reluctant to be called in as many soldiers, conscious of the darkness of history, would refuse to attack their compatriots.

Meanwhile in Ireland several hundred demonstrators gathered at the national television broadcaster RTE, angered by their portrayal as reckless imbeciles by this purveyor of fake news. This followed an anti-lockdown rally of seven thousand on the previous weekend, starring Dolores Cahill. Truly, this is an international resistance.

Sadly, the movement against the Covid regime is fractured. The Trafalgar Square speakers were as notable for who was absent. No Toby Young, whose brilliant online bulletin Lockdown Sceptics has kept the bewildered sane. No Peter Hitchens, the outspoken Mail on Sunday columnist who was first to put his head above the parapet and call out this Covid nonsense. No Carl Heneghan, the medical scientist at Oxford University who exposed the manipulation of mortality data.

The reasoning for such reticence is understandable but flawed. It’s the belief that a cause is undermined by association with discredited characters. But the likes of Piers Corbyn and David Icke are not bad people, and they are certainly not as mad as the Covid fanatics ruling our lives. You don’t need to distance yourself from an event just because some messages don’t exactly match your own. The main thrust of protest is not about whether 5G endangers health or Bill Gates is the devil incarnate, but freedom.

In an ecumenical movement, the people must take back control.