The Great Moon Hoax, as it has become known, was published in the New York Sun over several days in the summer of 1835. It claimed to describe what the astronomer John Herschel had seen through his telescope from the Cape of Good Hope. It was read and, apparently, believed by tens of thousands of people across the US and Europe.

The New York Sun was a penny newspaper with a circulation of 15,000, and rising. It usually carried local news and human-interest stories alongside fiction, poems and humour. A piece that announced “Great Astronomical Discoveries Lately Made by Sir John Herschel, LL.D. F.R.S. &c. At the Cape of Good Hope [From Supplement to the Edinburgh Journal of Science]” was uncommon but clearly intriguing.

It began by admitting that this was “an unusual addition to our journal” but promised it was worth reading, for there had been

recent discoveries in Astronomy which will build an imperishable monument to the age in which we live, and confer upon the present generation of the human race a proud distinction through all future time.

The first article gave little more away, simply describing Herschel’s telescope. Over the following days, however, the articles included increasingly lavish descriptions of planets, the lunar landscape, “several new specimens of animals” and, ultimately, in the last paragraph of the 6th and final part, the bat-like “Vespertilio-homo”, which appeared “scarcely less lovely than the general representations of angels by the more imaginative schools of painters.”

The articles described animals on the Moon, including bison, goats, unicorns, bipedal tail-less beavers and bat-like winged humanoids (“Vespertilio-homo“) who built temples. There were trees, oceans and beaches. These discoveries were supposedly made with “an immense telescope of an entirely new principle.”

You can read the lot online here. Two things stand out. The first is the sheer length and density of the ornate prose. Second is the fact that there is a good deal of plausible detail. 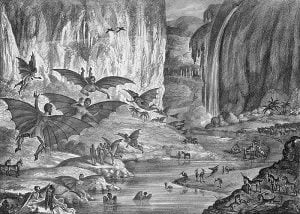 Those who knew something of scientific matters would be aware that not only was there a Sir John Herschel FRS but also that he was then at the Cape of Good Hope, observing with a large telescope. There was an Edinburgh Journal of Science too, although it had recently folded. Names of real instrument makers, opticians and astronomers were dropped, the optics of the telescope were described with convincing technical language, and what could be more likely than that the inventor consulted the Board of Longitude? (Except that it, too, had shut down.)

There has been much discussion (e.g. here, here, here and here) about the purposes of this elaborate fiction. It has been seen as prefiguring newspaper circulation wars, as demonstrating the gullibility of the public, as early science fiction (along with Edgar Allen Poe, who wrote not dissimilar newspaper pieces), and as a critique of popular science writing.

Poe had published his own Moon hoax in late June 1835, two months before the similar Locke Moon hoax, in the Southern Literary Messenger entitled “Hans Phaall – A Tale,” later republished as “The Unparalleled Adventure of One Hans Pfaall.” The story was reprinted in the New York Transcript on September 2–5, 1835, under the headline “Lunar Discoveries, Extraordinary Aerial Voyage by Baron Hans Pfaall.” Poe described a voyage to the Moon in a hot-air balloon, in which Pfaall lives for five years on the Moon with lunarians and sends back a lunarian to earth. The Poe Moon hoax was less successful because of the satiric and comical tone of the account. Locke was able to upstage Poe and to steal his thunder. In 1846, Poe would write a biographical sketch of Locke as part of his series “The Literati of New York City” which appeared in Godey’s Lady’s Book.

What seems certain is that many did, at least initially, believe these were genuine observations. Harriet Martineau, who was then in America, mentioned the “sensation” surrounding the story, adding “it was some time before many persons, except professors of natural philosophy, thought of doubting its truth”.

The story of life on the moon quickly spread, not only to other New York publications but into other eastern states and then Europe. The New Yorker apparently professed its support for the account; Baptist missionaries reportedly contemplated whether the bat-people might need donations or the teachings of the gospel. The scientific community didn’t immediately declare the Sun’s reporting fraudulent—after all, they had so little information about the moon, no one could unequivocally state that there wasn’t life there.

James Gordon Bennett was another story. Editor of a competing penny paper, the New York Herald, Bennett took to his pages on August 31, immediately after the serial had wrapped, and accused the Sun of perpetuating a hoax upon the public. While the Edinburgh Journal of Science was a real publication, Bennett wrote, it had merged with another two years prior and, effectively, didn’t exist. He pointed his finger specifically at Richard Adams Locke, who had recently arrived at the Sun as editor, and had met Bennett briefly during a criminal trial and expressed an interest in astronomy. Locke had also enjoyed success selling his collected newspaper work in pamphlet form—exactly what the Sun had done with the moon story, moving 60,000 copies in a month.

Locke denied it; the two sparred back and forth in their respective papers. Even after mail arriving from Europe in September confirmed the hoax as fiction, Locke refused to budge. Finally, after leaving the Sun in 1836, Locke began to use “author of the moon hoax” as part of his byline. In 1840, he went into more detail, saying he intended the piece to be satire and a commentary on theologians and Christian pundits like Thomas Dick, a science writer who trumpeted the idea of life on other planets without any scientific basis for doing so.

Surprisingly, readers held no grudge against the Sun. Once the hoax was revealed, most found it to be a fun, clever method of raising awareness—and circulation—of the newspaper, which boasted of 30,000 readers two years later. Even Herschel was initially amused, finding it an innocent bit of comedy.

The only curmudgeon seems to have been Edgar Allan Poe: He accused Locke of stealing his idea; Locke, who died in 1871, never acknowledged Poe as an influence.

The Sun remained in business until 1916, dealing mostly in human interest stories and local New York news (after a series of mergers, it continued publishing under various names until the 1960s). Although there’s no evidence they reported any further on the moon’s inhabitants, they never printed a retraction, either. This seems strange if the story was intended as a hoax as the point a hoax is usually to convince and then confess, revealing the foolishness of readers and the skill of the hoaxer. Yet when the writer was outed by a rival newspaper, he repeatedly denied authorship.