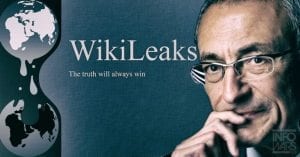 On 7 October 2016, WikiLeaks began publishing thousands of emails that it said were from Podesta’s Gmail account. The first batch of emails were released less than one hour after The Washington Post published a controversial video of Donald Trump making lewd comments about women. Throughout October, WikiLeaks released installments of the Podesta emails on a daily basis. On 18 December 2016, John Podesta stated in Meet the Press that the FBI had contacted him about the leaked emails on 9 October 2016, but had not contacted him since.

MostDamagingWikileaks.com Covers the Top 100 wilileaks from the Podesta email hack on their website. A big thank you for your work! Here’s 25 of those below:

1. PIZZAGATE – Click on Link. This one deserved its own separate entry.

Go to Term Page
" >art” but than the invitation for “Spirit Cooking dinner” would seem out of place. Additionally, she also had a Reddit AMA (Ask Me Anything) where she states, “If you are doing the occult magic in the context of art or in a gallery, then it is the art. If you are doing it in different context, in spiritual circles or private house or on TV shows, it is not art.”

3. Obama lied: he knew about Hillary’s secret server and wrote to her using a pseudonym, cover-up happened (intent to destroy evidence)

5. Hillary Clinton received money from and supported nations that she KNEW funded

6. Hillary has public positions on policy and her private ones

7. Paying people to incite violence and unrest at Trump rallies

10. Hillary deleted her incriminating emails. State covered it up. Asked about using White House executive privilege to hide from Congress.

13. Hillary caught on tape about rigging the Palestine election (audio)

15. Clinton campaign was in direct communication with DOJ regarding Hillary’s investigation

Go to Term Page
" >Iran ransom payments. The top law enforcement official, The United Sates Attorney General, “declines to cooperate” with an investigation by Congress. Let that sink in.

Go to Term Page
" >CNN the next night.

18. Hillary campaign hopeful for shooters in news stories to be white

21. Hillary was hateful, neglectful, above the law, “contemptuous” to her security detail, and “blatantly disregarded” security, (FBI docs)

22. Clinton Foundation schemed with Big Pharma: keep the price of AIDS drugs high in America and NO to cheaper generic versions

24. Hillary’s camp excited about a black teen’s murder (to help her agenda)

26. How millions of dollars were raised for the Clintons. Blurred lines between personal and Foundation money

Go to Term Page
" >war inside the foundation, with Teneo/Doug Band on one side, and Chelsea Clinton on the other.  In this attachment, Band tries to justify himself by going over how much money he has made for the Clintons.  It also dispels and puts to rest the notion that the Clintons don’t make money from the Foundation. In fact, it demonstrates that the Clinton fortune and the Foundation are indistinguishable and essentially the same, and that donations to the Foundation come with kickbacks for all involved.

Who Leaked the Podesta Emails to Julian Assange at Wikileaks?

Hillary Clinton and the CIA immediately accused Russia for the leaked emails. Russia denied. Craig Murray, a former British ambassador to Uzbekistan and a close associate of WikiLeaks founder Julian Assange, told The Daily Mail that Podesta’s emails were leaked to the organization by a disgruntled insider, not the Russians. Consequently, there are suspicions it may have been former Clinton Foundation CEO, Eric Braverman. (Though some of the Podesta emails are dated after Braverman’s tenure with the foundation, if he had Podesta’s password, he could still have accessed his email after leaving.)