Attorney General Merrick Garland called on the FBI to “use its authority” against parents who threaten or use violence against public school officials in a Monday memorandum.

Garland said there has been a “disturbing spike in harassment, intimidation, and threats of violence against school administrators, board members, teachers, and staff.” He said he is directing the FBI to work with each U.S. attorney and leaders “in each federal judicial district” to discuss strategy to address threats within 30 days of his statement.

The Department of Justice’s memorandum did not specify what it classifies as a crime and did not immediately respond to the Daily Caller News Foundation’s request for clarification on the matter.

Garland’s statement follows a letter from the National School Board Association (NSBA) that asked the federal government to get involved in the “immediate threat” of violence from parents faced by American public schools and its education officials. The NSBA said the incidents could be “the equivalent to a form of domestic terrorism and hate crimes.”

“It is shameful that activists are weaponizing the US Department of Justice against parents,” Nicole Neily, president of Parents Defending Education told the Daily Caller News Foundation in response to the memorandum. “This is a coordinated attempt to intimidate dissenting voices in the debates surrounding America’s underperforming K-12 education – and it will not succeed. We will not be silenced.” Continue Reading at The Daily Caller…

In early October Mark Levin broadcast a letter with insider information on the teachers union, Attorney General Merrick Garland, and the FBI who met and organized how to combat America’s parents who were speaking out at local school board meetings across the country.

This was after Garland testified and said he was not sending the feds to threaten American parents who speak out at their local school board meetings.

One book that was found in several libraries is titled, Gender Queer: A Memoir by Maia Kobabe.

The book is a graphic novel with drawings that explains in lurid detail the sexual interactions between two young men, has been inserted into high school libraries across America, despite it violating guidelines against pornography or sexually explicit materials being provided to minors and paid for with our tax dollars.

Kevin from Texas sent us this email after he discovered this book was available at his daughter’s school.

After reading a story on TGP yesterday by Jacob Engels about the book Gender Queer, I was outraged. My wife said to me, “I’m glad you weren’t the parent at that meeting, you would have been arrested.”. She’s right.

I thought, “How could school administrators allow such filth to be allowed in a public school library?”. It’s not like the title of the book is innocuous and wouldn’t lead any normal person to question the context…

… I live in a suburb north of Dallas and although it’s growing quickly, it is still a conservative area. We have 3 girls in the school system in which we are active and engaged. (I can assure you that my engagement has just increased to a whole new level.) If this book can make its way into schools here, it can be in schools anywhere. I got a copy of the book in order to verify for myself the accuracy detailed in your article. It was accurate alright. I include images from the book and please publish them because parents need to comprehend what is happening in our schools:

Here are a couple pages from the book. Most Americans did not realize this is a PICTURE book with explicit drawings. 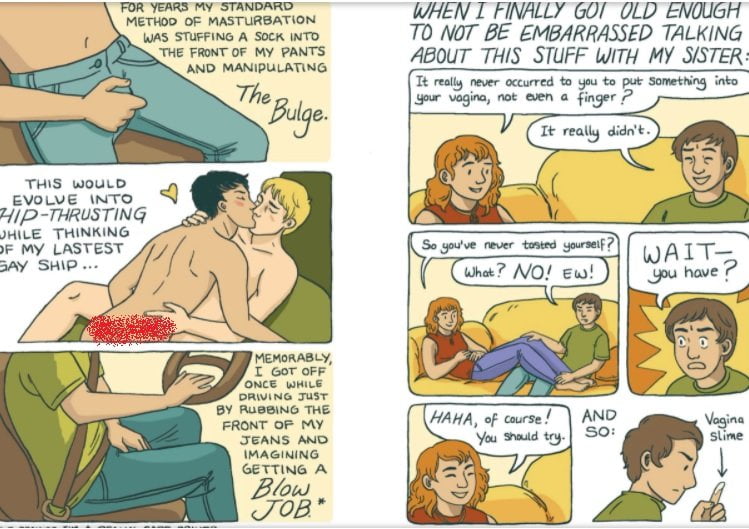 These are two pages from the picture book.
How do they get away with this in public schools? Why is this book necessary? Why do the kids need pictures of sex? And how is this even legal?

To be clear it really doesn’t matter if it is photos of gay sex or straight sex in the books.  Both are objectionable for school libraries.

And why is Merrick Garland sending out the FBI to harass American parents for making a stand against this filth in our schools?