Lindauer testified: “Throughout the summer of 2001, we were convinced the Twin Towers would be demolished, using a combination of explosives with the airplanes.” Tr. 6:8-10.

“I made one fatal mistake. I requested to testify through proper channels … I should have known better than to trust Congress. Thirty days after I phoned the Offices of John McCain and Senator Trent Lott, I woke to find the FBI pounding on my front door. At that point, I gained a new distinction as the second non-Arab American arrested on the Patriot Act, facing secret charges, secret evidence and secret grand jury testimony. I was held under indictment for five years without a Trial–and thrown in prison on Carswell Air Force Base in Texas for a year, without a hearing.” Tr. 18:4-5; 17-25.

“To Washington’s greatest shame, the Patriot Act, which Congress proclaimed a key judicial weapon to break up terrorism in the United States, was first used to stop a whistle blower from telling the truth about 9/11 and Iraqi Pre-

As a result of this testimony Lindauer was declared mentality unfit—a tactic thought to have passed into history after it was exposed as a commonly used way to muzzle dissent in the former Soviet Union, replete with corrupt judges willing to falsely imprison targets on fabricated KGB charges. In Lindauer’s case, her C.I.A.-compliant Judge Mukasey became Bush Jr.’s Attorney General as a reward.

To silence Lindauer’s testimony to the 9/11 Commission, Lindaeur was only the second non-Arab to be prosecuted under The Patriot Act. She was arrested on Mar. 11, 2004 and assigned to the corrupt Southern District of New York and Judge Michael B. Mukasey. George Bush later appointed Mukasey as Attorney General on Nov. 09, 2007.

Lindauer was held without a trial or even a hearing at Carswell Air Force Base (incarcerated in 2005) and ruled to be mentally unfit to stand trial. The government tried to administer psychotropic drugs to further incapacitate her testimony on 9/11. She was released to Judge Loretta Preska in 2007. In 2008, a blogger began publicizing her illegal incarceration. The government dropped charges on Jan. 15, 2009. She published a book on her ordeal titled Extreme Prejudice and is now a government corruption critic.

In a 2018 interview, Author and Whistleblower Susan Lindauer discusses with Victurus Libertas President Trump’s good points, the disappointment of Attorney General, Jeff Sessions, the Deep State, brings to light a very personal attack on her and her home by the Banksters and the dangers of living in a Sanctuary City, and how Robert Mueller came after her with false accusations similar to how he attacked President Trump. 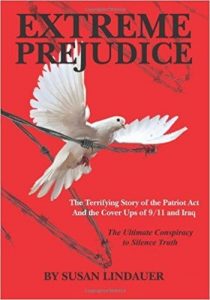 NEW SECOND EDITION. What if the government decided to invent a great lie to justify a disastrous war? What would happen to the people who know the truth? EXTREME PREJUDICE delivers an explosive, high tension expose of the real facts surrounding the CIA’s advance warning of 9/11 and an insider’s look at Iraqi Pre-War Intelligence, told by one of the very few U.S. Assets covering Iraq before the War. It reveals the depths of deception by leaders in Washington and London to promote a successful image of their terrorism policy, and the shocking brutality to suppress the truth of their failures from Americans and the world community.

12 months ago
From their website… We exist to counter the massive disinformation campaign regarding the pandemic. We are diverse, exceedingly well-credentialed physicians with extensive front line experience treating COVID-19 and the risky health effects due to the lockdowns. There are many early treatment options! Most people do just fine! There is no reason to live in fear! If you would like to know the facts from doctors who are passionate about giving you those facts, watch our videos, found under Summit. If you need access to early treatment go to Referral … Read More