Huge floods in Australia have mysteriously been kept out of the MSM.

It Appears that to “get even” with the Australian people’s reaction to the COVID shot the government released a weather mod hell storm on Brisbane at the same time “they” decided to drain a huge dam.

Coincidence? Obviously no, and it destroyed 20,000 homes and obviously killed a large number of people with 13 admitted to so far. The flood happened literally instantly and was so massive it submerged the power lines.

Climate change my *ss, “they” released the Wivenhoe Dam when it was only at 62 percent capacity. “They” claim the release was only for an hour and that it did not contribute to the flooding. If that be the case, “they” ought to be happy to try to explain these reports, which state the dam release raised water levels by 10 METERS (33 FEET) which represented the entire depth of that flood. 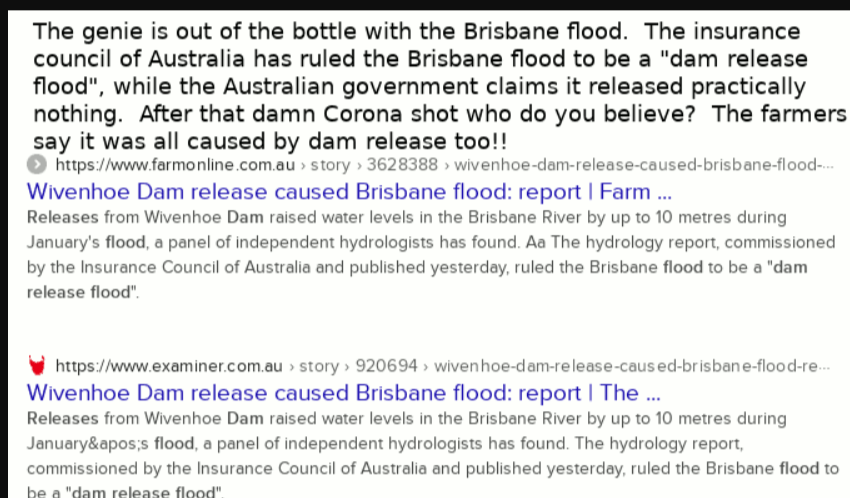 These flood monitoring cameras demonstrate the extent of the rainfall and just how quickly waters rose, causing major damage during the recent #seqfloods 😮 pic.twitter.com/56CnQfuHp0

Watch this time lapse video of the floods happening. That aint no rain caused flood, That’s a dam release baby!!!

Worse: to receive assistance, or even offer assistance to the flood victims, you had to prove you were Corona Vaxxed.

So they release a dam in the middle of a weather “bomb” they created, with the dam alone raising water levels by over 30 feet and then tell people if they want help with that, or even if they WANT TO HELP, before doing so, they have to get their corona shot!!!