On 23 January 1992 tabloid, The Star named Gennifer as Clinton’s mistress. Three days later he and wife Hillary appeared on 60 minutes, side by side, flat denying the claim. Gennifer Flowers (born January 24, 1950) was an American model and actress who obtained notoriety after revealing the day after the 60 minutes episode during his 1992 Presidential Campaign that she had a 12 year sexual encounter with Bill Clinton. In January 1998, Clinton testified under oath that there had been a sexual encounter between Flowers and him. Before Clinton’s presidency, she posed nude for Penthouse magazine (December 1992) and was an actress in two films and one TV show.

After Clinton denied having a relationship with Flowers on 60 Minutes, she held a press conference in which she played tape recordings she had secretly made of phone calls with Clinton. Clinton subsequently apologized publicly to Mario Cuomo for remarks he made about the then-Governor of New York on the tapes. During the press conference, Flowers was famously asked several questions by “Stuttering John” Melendez of the Howard Stern Show if she was planning to sleep with any other candidates before the election, along with if Clinton used a condom and if there ever was a threesome. She responded by laughing at Stuttering John’s prank whereas her advisor wanted to ignore him by trying to answer other questions. News reports at the time speculated that the taped phone conversations between Flowers and Clinton could have been doctored; Flowers had sold the original tapes to Star and they were never lab-tested. Clinton aides James Carville and George Stephanopoulos backed this claim as well. Stephanopoulos later claimed in a 2000 interview with journalist Tim Russert that “Oh, it was absolutely his voice, but they were selectively edited in a way to – to create some – some impression.”

Speaking in 2013 to the Daily Mail, Gennifer said of the affair with Bill Clinton:

‘It was a defining moment in American culture absolutely and to an extent I paid a high price for my honesty.’

In December 1996, Flowers talked about her sexual relationship with Clinton on The Richard Bey Show. The show was canceled the following day. Bey later attributed a direct connection between the two consecutive events.

In an exclusive interview with MailOnline, Gennifer spoke of her deep regret at turning down Clinton’s pleas to talk (around 2005) and revealed her belief that they would still be together today, were it not the birth of Clinton’s daughter, Chelsea.

‘Bill and I would be together today if it wasn’t for politics. It was me, Bill and Hillary. Then they had Chelsea and the stakes got too high.’

Now a sex columnist, Gennifer says that Bill Clinton taught her everything she knows about sex. 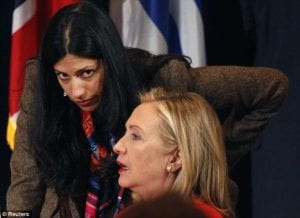 When rumors surfaced of an affair between Hillary Clinton and her transition office chief, Huma Abedin, Gennifer was not surprised. The rumors concerning Huma, wife of disgraced former Mayoral candidate Anthony Weiner, emerged as she stood by her husband in the wake of his ‘sexting’ scandal.

Gennifer said: ‘I don’t know Huma or the Weiners. I just know what Bill told me and that was that he was aware that Hillary was bisexual and he didn’t care. He should know. ‘He said Hillary had eaten more p***y than he had.’