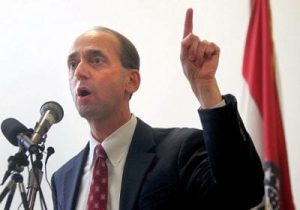 Schweich served as Chief of Staff for former U.S. Senator John Danforth’s investigation of the federal government’s actions in connection with the 1993 FBI siege of the Branch Davidian compound in Waco, Texas. He had announced his candidacy for governor just one month before his death, and was found with a gunshot wound to the left temple. Tom Schweich was right-handed. One month later, his media director, Robert “Spence” Jackson, was found dead of a similar wound.

Schweich was 54. He had been in office since January 2011 and had easily won election in November to a second, four-year term. He announced a month ago that he was seeking the Republican nomination for governor in 2016, and was gearing up for a primary fight against Catherine Hanaway, a former U.S. attorney and Missouri House speaker.

Schweich seemed unusually agitated — his voice sometimes quivering and his legs and hands shaking — when he told an AP reporter on Monday that he wanted to hold a press conference to allege that Missouri Republican Party Chairman Hancock had made anti-Semitic remarks about him.

12 months ago
A new study by researchers at the University of Cambridge finds that the government-imposed lockdowns in response to the coronavirus pandemic cause significant harm to children’s mental health. The study, published this week in the Archives of Disease in Childhood, was the first of its kind to analyze data on younger children’s mental health before and during the first lockdown in the United Kingdom last spring. Following 168 children between the ages of 7 ½ and 11 ½, the researchers conclude: “During the UK lockdown, children’s depression symptoms have increased substantially, … Read More