A board member of German insurer BKK ProVita recently had analyzed the data of millions of insured individuals of the BKK group. The results conclude that the number of COVID-19 “vaccine” side effects is much higher than is being reported by the German federal agency and medical regulatory body, the Paul Ehrlich Institute (PEI). According to BKK board member Andreas Schöfbeck, the new data is an “alarm signal.” He highlighted on Wednesday that “the figures determined are significant and urgently need to be checked for plausibility.” Noting the importance of the potential findings, he added:

“The numbers that resulted from our analysis are very far away from the publicly announced numbers. It would be ethically wrong not to talk about it.”

The result: From the beginning of 2021 to the middle of the third quarter, 216,695 BKK policyholders were treated for vaccine side effects. Seven thousand six hundred sixty-five (7,665) cases of complications from other vaccines were excluded. The statistics did not include any multiple treatments of insured persons—they calculated one per patient. 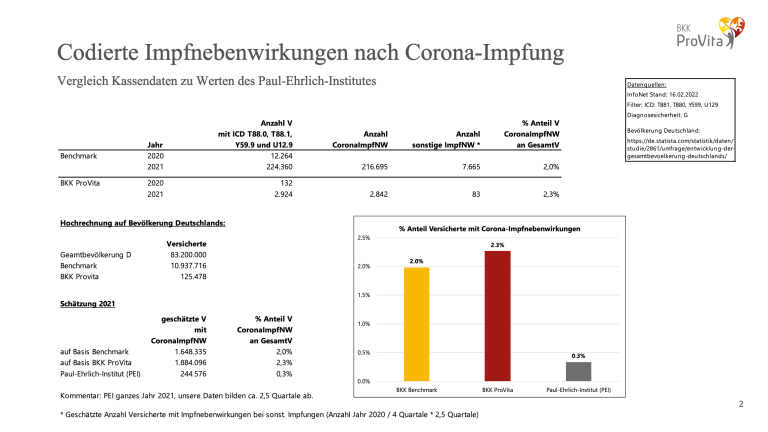 By comparison, WELT notes that up to the reporting date of Dec. 31, 2021, PEI “only recorded 61.4 million vaccinated people, [with] 244,576 adverse reaction reports triggered by COVID-19 vaccines.” Schöfbeck remarked that the data he and his team evaluated cover only 10.9 million policyholders and just seven and a half months—yet the vaccination campaign in Germany has been active for 14 months. Schöfbeck explained:

“Our analysis shows that we are dealing with a clear underreporting.” He added, “According to our calculations, we consider 400,000 visits to the doctor by our policyholders because of vaccination complications to be realistic to this day. Extrapolated to the total population, this value would be three million.”

The new data is “alarming,” says BKK board member Schöfbeck in a report by WELT.https://t.co/KV4orAjUCB

Explaining why this massive under-reporting might be occurring, Schöfbeck names the reporting system as a problem, stating, “Doctors are not paid to report side effects of vaccinations. At the same time, this process is very time-consuming. It’s simply impossible to report everything.” While WELT reports that based on the data pool, “no statement can be made about the nature and severity of the complaints,” Schöfbeck, who has served on the board of BKK ProVita for 21 years, remarked:

“One thing is clear: the people felt so bad that they went to the doctor.”

Additionally, in a letter to PEI President Paul Cichutek dated Feb. 21, 2022, with the subject “Strong warning signal for coded vaccination side effects after corona vaccination,” Schöfbeck explains that the new figures are seen as “a significant alarm signal that must be taken into account when the vaccines are used further.” He emphasized that he expects quick answers because a “danger to people’s lives” cannot be ruled out. Schöfbeck further explains in the letter:

The data basis for our evaluation is the billing data of the doctors. Our sample is taken from the anonymized database of the company’s health insurance companies. The sample includes 10,937,716 insured persons. So far, we have the doctors’ billing data for the first half of 2021 and about half for the third quarter of 2021. Our query contains the valid ICD codes for vaccination side effects. This evaluation has shown, although we do not yet have the complete data for 2021, that based on the available figures, we are already assuming 216,695 treated cases of vaccination side effects after corona vaccination from this sample.

Suppose these figures are extrapolated to the year as a whole and to the population in Germany. In that case, it is likely that 2.5-3 million people in Germany received medical treatment because of side effects of vaccination after the Corona vaccination.

We see this as a significant alarm signal that must be considered when the vaccines are used further. In our opinion, the figures can be validated relatively easily and at short notice by asking the other types of insurance (AOKen, substitute health insurance companies, etc.) to evaluate the data available to them accordingly. Extrapolated to the number of vaccinated people in Germany, this means that around 4-5% of the vaccinated people were in medical treatment because of vaccination side effects.

Furthermore, as reported by WELT, Schöfbeck reiterates in the letter that it is the opinion of the board there is significant under-reporting of COVID-19 “vaccine” side effects. He emphasizes the importance of identifying the causes of this in the short term, offering, “Our first assumption is that since no remuneration is paid for reporting side effects of vaccinations, the Paul Ehrlich Institute (a federal research institute for vaccines and biomedicines) is often not reported because of the great effort involved. Doctors have reported to us that it takes about half an hour to report suspected vaccine damage.” His letter concludes:

“This means that 3 million suspected cases of vaccination side effects require around 1.5 million working hours for doctors. That would be almost the annual workload of 1,000 doctors. This should also be clarified in the short term.