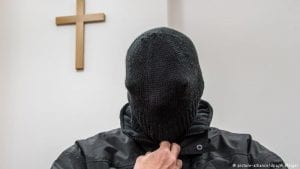 A German priest has been sent to a psychiatric institution after pleading guilty to a string of child abuse offenses. He was previously defrocked by the Catholic Church but kept abusing with the help of false documents. The 53 year old Thomas Maria B., who was born in Wuppertal, is guilty of having sexually abused five German boys under the age of 14 at least a total of 108 times between 1997 and 2016.

A German ex-priest was handed an eight-and-a-half year sentence to be detained in a psychiatric institution, with any possibility of future release depending on the outcome of therapy, a regional court in the southeastern town of Deggendorf ruled.

The judge said his treatment would take many years and its success was doubtful, but that a guilty plea had increased the repeat pedophile’s chances of eventual release.

The man was found guilty of seriously sexually abusing five boys on more than 100 occasions since the mid-1990s. He was also convicted of attempted rape of a 18-year-old girl, intentional bodily harm, falsification of documents and possession of child pornography.

The man was previously imprisoned from 2003 to 2009 for separate sexual offences.

After completing studies in theology, the man was ordained a priest in Poland in 1994. State prosecutors accuse the man of having used fake documents to fraudulently gain access to the priesthood. A church court in the German archdiocese of Freiburg removed the man from the priesthood in 2008, which officially forbade him from carrying out priestly work. That decision was upheld by another church court in Munich in 2012.

The man continued, illegally, to present himself as a priest after his expulsion, dressing as such and using a fake identity card. He continued to hold religious services and collections; prosecutors alleged he illegally earned at least €100,000 ($120,000). It is reported that Thomas Maria B. won the trust of especially devout families, allowing him to abuse their children on pilgrimages as well as in their homes, as he also sometimes lived with the families. Moreover, he allegedly misused the seal of confession with the children to keep them from telling their parents about the abuse. His crimes took place in Austria, Italy, Poland, Switzerland, the Mainz area in western Germany and Deggendorf in Bavaria.