The first session of the Continental Congress opened the beginning of September in the year 1774 with prayer in Carpenter’s Hall, Philadelphia.

“Plead my cause, Oh, Lord, with them that strive with me, fight against them that fight against me. Take hold of buckler and shield, and rise up for my help. Draw also the spear and the battle-axe to meet those who pursue me; Say to my soul, ‘I am your salvation.’ Let those be ashamed and dishonored who seek my life; Let those be turned back and humiliated who devise evil against me.”

“Be Thou present, O God of Wisdom, and direct the counsel of this Honorable Assembly; enable them to settle all things on the best and surest foundations; that the scene of blood may be speedily closed; that Order, Harmony and Peace may be effectually restored, and that Truth and Justice, Religion and Piety, prevail and flourish among the people. … Preserve the health of their bodies, and the vigor of their minds, shower down on them, and the millions they here represent, such temporal Blessings as Thou seest expedient for them in this world, and crown them with everlasting Glory in the world to come. All this we ask in the name and through the merits of Jesus Christ, Thy Son and our Saviour, Amen.”

When the Congress met, Mr. Cushing made a motion that it should be opened with Prayer. It was opposed by Mr. Jay of New York, and Mr. Rutledge of South Carolina because we were so divided in religious sentiments, some Episcopalians, some Quakers, some Anabaptists, some Presbyterians, and some Congregationalists, that we could not join in the same act of worship. Mr. Samuel Adams arose and said that he was no bigot, and could hear a Prayer from any gentleman of Piety and virtue, who was at the same time a friend to his Country.

He was a stranger in Philadelphia, but had heard that Mr. Duché deserved that character and therefore he moved that Mr. Duché, an Episcopal clergyman might be desired to read Prayers to Congress tomorrow morning. The motion was seconded, and passed in the affirmative. Mr. Randolph, our president, vailed on Mr. Duché, and received for answer, that if his health would permit, he certainly would. …”

“Accordingly, next morning Reverend Mr. Duché appeared with his clerk and in his pontificals, and read several prayers in the established form, and read the collect for the seventh day of September, which was the thirty-fifth Psalm. You must remember, this was the next morning after we heard the horrible rumor of the cannonade of Boston.

I never saw a greater effect upon an audience. It seemed as if heaven had ordained that Psalm to be read on that morning. After this, Mr. Duché, unexpectedly to every body, struck out into an extemporary prayer, which filled the bosom of every man present. I must confess, I never heard a better prayer, or one so well pronounced.

Episcopalian as he is, Dr. Cooper himself never prayed with such fervor, such ardor, such earnestness and pathos, and in language so elegant and sublime, for America, for the Congress, for the province of Massachusetts Bay, and especially the town of Boston. It has had an excellent effect upon everybody here. I must beg you to read that Psalm.”

The Library of Congress printed on an historical placard of Carpenter’s Hall, Philadelphia: “Washington was kneeling there with Henry, Randolph, Rutledge, Lee, and Jay, and by their side there stood, bowed in reverence the Puritan Patriots of New England. … ‘It was enough’ says Mr. Adams, ‘to melt a heart of stone. I saw the tears gush into the eyes of the old, grave, Pacific Quakers of Philadelphia.’”

The Journals of Congress then recorded their appreciation to Rev. Mr. Duché:

“Wednesday, September 7, 1774, 9 o’clock a.m. Agreeable to the resolve of yesterday, the meeting was opened with prayers by the Rev. Mr. Duché. Voted, That the thanks of Congress be given to Mr. Duché … for performing divine Service, and for the excellent prayer, which he composed and delivered on the occasion.”

Considering myself under the twofold character of a minister of Jesus Christ, and a fellow-citizen … involved in the same public calamity with yourselves … addressing myself to you as freemen … ‘Stand fast, therefore, in the liberty, wherewith Christ hath made us free’ (Galatians, ch. 5).

O Lord our Heavenly Father, high and mighty King of kings, and Lord of lords, who dost from thy throne behold all the dwellers on earth and reignest with power supreme and uncontrolled over all the Kingdoms, Empires and Governments; look down in mercy, we beseech Thee, on these our American States, who have fled to Thee from the rod of the oppressor and thrown themselves on Thy gracious protection, desiring to be henceforth dependent only on Thee. To Thee have they appealed for the righteousness of their cause; to Thee do they now look up for that countenance and support, which Thou alone canst give. Take them, therefore, Heavenly Father, under Thy nurturing care; give them wisdom in Council and valor in the field; defeat the malicious designs of our cruel adversaries; convince them of the unrighteousness of their Cause and if they persist in their sanguinary purposes, of own unerring justice, sounding in their hearts, constrain them to drop the weapons of war from their unnerved hands in the day of battle! Be Thou present, O God of wisdom, and direct the councils of this honorable assembly; enable them to settle things on the best and surest foundation. That the scene of blood may be speedily closed; that order, harmony and peace may be effectually restored, and truth and justice, religion and piety, prevail and flourish amongst the people. Preserve the health of their bodies and vigor of their minds; shower down on them and the millions they here represent, such temporal blessings as Thou seest expedient for them in this world and crown them with everlasting glory in the world to come. All this we ask in the name and through the merits of Jesus Christ, Thy Son and our Savior.

Brought to you by AmericanMinute.com. 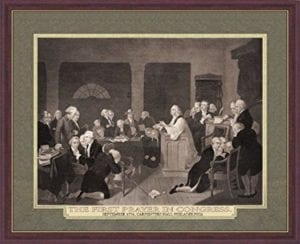 The First Prayer in Continental Congress held in Philadelphia, September 1774.

This Historic moment is a unique work of art
that reflects the foundation of our Great Country.

Comes with a 8″ X 10″ Cherry Frame with gold accent Guide for a legend of the people in the picture. 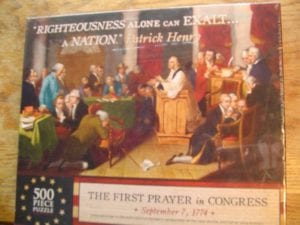